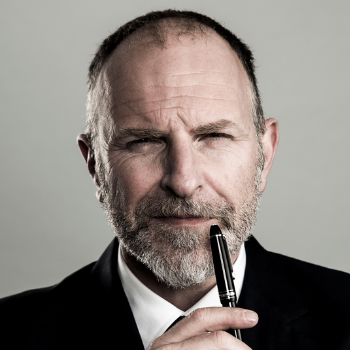 Simon Evans is an established act on the stand-up comedy circuit. His style has been characterised as aloof, sardonic and sharp-witted.

He has appeared on most of the TV stand up comedy showcases and a number of topical comedy shows.  He also gave acclaimed acting performances in Rich Hall's 'Fishing Show' and 'Cattle Drive'.

Simon appears regularly on BBC Radio 4 - hosting and writing seven series of the spoof news show 'The Way It Is' (as Richard Richard), as well as appearing on numerous panel games including 'The News Quiz', Armando Iannucci's 'Charm Offensive' and 'The Unbelievable Truth.' He has also featured on discussion programmes such as 'Off the Page'.

Simon writes for a number of TV's most famous comedians - Dara O'Briain, Lee Mack and Sean Lock all ask for him by name and he was instrumental in creating and writing for Dave TV's 'Argumental'.

He also writes for radio shows, including the Radio Four sketch show 'The Odd Half Hour' and Lee Mack's recent Radio Two show.

In July 2004 he performed at the 'Just for Laughs' festival in Montreal, and the following spring at the Aspen Comedy Festival in Colorado.

In 2010 Simon Evans supported Lee Mack on his UK tour - Going Out and appeared alongside Emo Philips at Latitude Festival in Suffolk.

In 2020 Simon created some virtual performances for your event:

Simon to interview and mediate discussions with senior business figures, injecting humour to as great or as little a degree as required and requested.

This is based on the work that Simon has done with and for Radio Four, Goes to Market in particular, and having also spoken on numerous panels, eg with Merryn Somerset Web at the Adam Smith House in Edinburgh, on a range of subjects, and at Kilkenomics and so on.