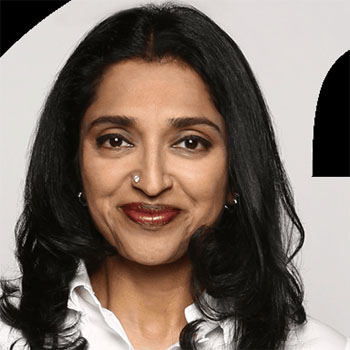 Sindhu is a stand-up comedian, based in London. Born in India, she studied at the universities of Delhi, Oxford, Chicago and McGill, and has lived in Delhi, Lucknow and the Philippines. Truly cosmopolitan!

She started performing stand-up comedy in 2012 and has performed on stage in the UK, India and the US

She has appeared at the Edinburgh Fringe Festival and was nominated for the BBC New Comedy Award in 2016, was second in the 2017 Leicester Mercury Comedian of the Year and joint third in the 2017 NATYS: New Acts of the Year Show.

TV appearances include Have I Got News For You, QI and Alan Davies: As Yet Untitled. She has hosted the BBC Radio 4 Comedy of the Week podcast, while other radio appearnaces include Quote... Unquote and The Unbelievable Truth.

While remowned for her edgy humour, she reflects on the differences between her country of birth, and adopted homeland not least on approaches to child rearing!