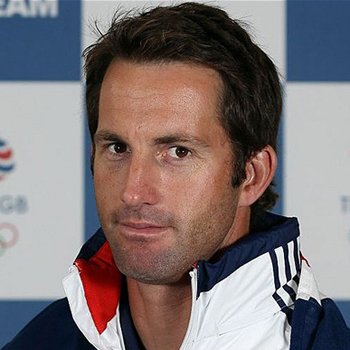 Olympic gold medal winner at the London 2012 Olympics, Ben Ainslie is the most successful British sailor in history.
He competed at his first Olympics in 1996 and won a silver in the Laser class at the age of just 19, before going one better in 2000. He then scooped golds in the Finn class in 2004 and 2008 - a fourth Olympic gold in 2012 would equal the record for a sailor, held by Denmark's Paul Elvstrom.
Ainslie is also a 10-time world champion - claiming a record sixth finn title in May 2012 - and a three-time World Sailor of the Year.
He was born in Macclesfield but grew up in Restronguet, Cornwall. His sailing career began at the age of eight, which is hardly a surprise given his father Roddy captained a boat that took part in the inuagral Whitbread Round the World Race in 1973/74. By the age of 16 Ben was already laser radial world champion.
Ben Ainslie received the MBE in 2001 after his success in Sydney, the OBE in 2005 following the Athens Olympics and CBE in the 2009 New Year Honours, following the Beijing Games.
He has won the International Sailing Federation's top Award more times than anyone else, being named ISAF World Sailor of the Year in 1998, 2002 and 2008. He was awarded British Yachtsman of the Year in 1995, 1999, 2000 and 2002.
At the 2011 ISAF Sailing World Championships he was in a winning position going into the closing stages of the regatta but was disqualified for physically threatening a photographer- he felt that the photographer's boat's wake had prevented him from passing a competitor.
On 19 May 2012 he was the first person to carry the Olympic torch when it began its 70-day tour of the UK at Land's End.
His gold medal at the 2012 Olympics was presented by two Royal former Olympians, Princess Anne and King Constantine of Greece. Ben was awarded a Knighthood in the 2013 New Year Honours List.

Olympic gold medal winner at the London 2012 Olympics, Ben Ainslie is the most successful British sailor in history.