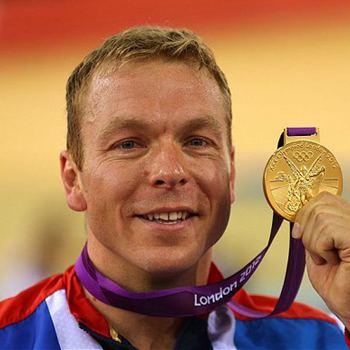 The hero of London 2012 Olympics, and master of track cycling,  Sir Chris Hoy surpassed Sir Steve Redgrave as Britain's most successful Olympian after adding keirin gold to his team sprint success, giving him a total of six Olympic golds and a silver.
Chris has been competing in various sports since he was seven years old. From the age of seven through to fourteen, he raced BMX and was Scottish Champion, British No 2, European No 5 and World No 9. He was sponsored by Kwik-Fit and Slazenger and raced all over Britain, Europe and USA.

He continued cycling through his teenage years. He also rowed and played rugby for his school, George Watson's College. He rowed for Scotland and won a British Championship silver in the Junior Coxless Pairs.

Chris joined his first cycling club, Dunedin CC, in 1992, run by Ray and Doreen Harris. Over these early years, he raced Time Trials, Mountain Bike, Road and Track. As the other events dropped away, Chris concentrated on Track and in 1994, he joined The City of Edinburgh Racing Club, the most successful track club in Britain.

Since turning senior, Chris has concentrated on track sprint cycling and has been a member of the Great Britain National Squad since 1996.

In addition to his sporting achievements, he studied at the University of St Andrews where he was voted Sportsman of the Year 1996, and was awarded his Blues in his first year. He transferred to Edinburgh University where he graduated in 1999 with an BSc Honours in Applied Sports Science.

In 2005, he was awarded two Honorary Doctorates, one from the University of Edinburgh and another from Heriot Watt University. He was awarded an MBE in the Queen's New Year's Honours list.

Following his historic three Olympic Golds in Beijing, Chris was voted the BBC Sports Personality of 2008. In an emotional presentation, he received a 5 minute ovation from the packed house.
He was awarded a knighthood in the 2009 New Years Honours List.
In April 2013 he announced his retirement from competitive cycling, saying he was very proud to have taken part in the transformation of the sport.
Read More