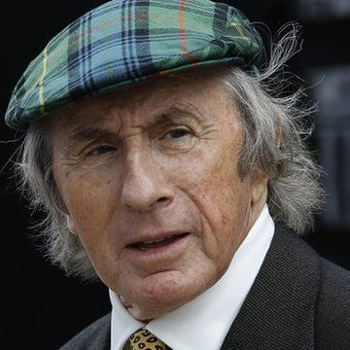 Born into a motoring family, Sir Jackie was involved with cars from an early age. His father's garage sold Austins and Jaguars and his elder brother Jimmy was a talented driver.  Jackie left school at 15, by his own admission  "with great relief" and, to avoid worrying his mother, began competing in motor racing as 'A.N. Other'.

The grandson of a gamekeeper, Jackie started competitive shooting before he was fifteen and went on to shoot for Scotland and Great Britain. He won the Scottish, Irish, Welsh, English and British Championships, as well as twice winning the Coupe De Nations.

Having retired from shooting in 1962 and was drawn into motorsport as a mechanic, preparing sports cars for Scottish Club racing.  He was given an opportunity to compete as a driver by Scottish enthusiast Barry Filer, and his driving skills quickly became obvious.  While his mother never recognised that he drove, with the support of his wife Helen (they married in 1962), he rapidly began to dominate British Club racing, and then the British and European Formula 3 scene.  His career took off internationally in 1965, when he partnered Graham Hill in the BRM Formula One team.  At Silverstone, in May 1965, he won his first Formula One Race; the Daily Express International Trophy for Formula One.  At Monza, in only his eighth Formula One race, he scored the first of his 27 Formula One Grand Prix Championship victories from only 99 starts; Monaco in 1966 brought number two. Sir Jackie teamed up with Ken Tyrrell in 1968, to forge one of the most successful alliances in World Championship history, the rest would all be won with Ford power.

Sir Jackie Stewart competed against some of the great names of Grand Prix:  Jim Clark, Surtees, Hill, Rindt, Fittipaldi, Brabham and their peers.  In doing so, he crafted a reputation and a racing record that would stand for 14 years - a record that was unbroken until Alain Prost took it.  Sir Jackie remains one of the top drivers of all time.

Seen by many as the first truly modern professional racing driver, Sir Jackie has done more than any man, before or since, to build a business life on the basis of his on-track record. Translating his legendary eye for detail from cockpit to boardroom, he has shared with the automotive industry, especially in his long partnership with Ford, (which spanned forty years), the rich fruits of his racing experience. Thanks to his hands-on participation in the work of Ford's development engineers around the world, a generation of road-going vehicles are better for his contribution.

His skill for identifying potential partners and making partnerships work for all the players involved, was invaluable in his guiding role with Paul Stewart Racing since 1989 and with Stewart Grand Prix; which grew from that association in 1996.  Willingness to look beyond the confines of traditional racing relationships is also the hallmark of Sir Jackie's contribution to all of these enterprises.

The drive he brought to his often-solitary campaign for motor racing safety was matched by the energy he expended as the Founder, Chairman and Chief Executive Officer of Stewart Grand Prix.  The Stewart-Ford Grand Prix Team was sold to the Ford Motor Company towards the end of the 1999 season. Sir Jackie remained on the Board of the newly named Jaguar Racing Team, to develop and nurture sponsorship relations.  Sir Jackie's uncanny eye for an opportunity that served him so well on the track, is now his greatest asset in his business life.

Through his motor racing career, Sir Jackie developed many commercial relationships; with companies such as Goodyear (17 years), Bridgestone (5 years), Elf (12 years) and ABC Sports (15 years).  Sir Jackie worked globally to project the motor, tyre, fuel and oil industries, dealing with the commercial sector, political structures and police authorities.  In addition, Sir Jackie also campaigned on behalf of governments from all parts of the world for road safety, driver education, compulsory seat belt wearing and crash helmet legislation.  Sir Jackie's commercial relationships extended to Rolex, which he joined in 1968 and Moet & Chandon, (of which he is now on the Board of Directors), in 1969, and these relationships continue to the present day.

In January 1996 Sir Jackie announced that he had secured the factory Ford Formula One engine supply for 1997 and that a new organisation called Stewart Grand Prix was to be established.

Stewart Grand Prix entered its first Formula One Grand Prix season in 1997 with a highly motivated group of employees committed to winning. In that maiden season, Stewart Grand Prix rocked the established order when Rubens Barrichello took the SF-1 to second place in Monaco - the team's fifth competitive race.  The Team were to secure one pole position and five podium finishes in total.  Late in the 1999 season, it was announced that the team was to become Jaguar Racing from the start of the 2000 season. Johnny Herbert gave the team its first Grand Prix victory, heading home with teammate Rubens Barrichello, in an emotional one-three finish in the European Grand Prix at the Nurburgring in 1999.

After 40 years with Ford Motor Company, possibly the longest association a sportsman has achieved with a major multi-national corporation, Sir Jackie took the decision to retire from his responsibilities both with Ford and Jaguar Racing.  With this change in direction, in 2004 Sir Jackie entered into a five-year relationship with The Royal Bank of Scotland, the world's 5th largest bank, with a role as Global Ambassador. Sir Jackie's activities with RBS involve him attending many Formula One races and various motorsport functions with the Bank, in addition to hosting and speaking at various world-class sporting and corporate events around the world.  Sir Jackie was instrumental in consulting on behalf of RBS, both for their entry into Formula One, and subsequently their negotiations for the sponsorship of the Williams F1 Team as well as other business opportunities.

Sir Jackie has been recognised for his services both to motorsport and the motor manufacturing industry, by the award of the OBE in 1972 and subsequently a Knighthood in 2001.  He is an inspirational speaker and motivator with honorary doctorates from as far afield as Michigan, Glasgow Caledonian University, the Heriot-Watt University in Edinburgh, the University of Glasgow, the University of Stirling (where he is also a Professor), Cranfield University and most recently Edinburgh University.  Sir Jackie has also received international honours from The King of Jordan and The King of Bahrain.