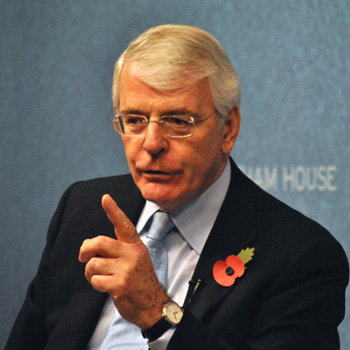 World Leader: As former prime minister of Great Britain, Sir John Major is one of the most respected figures in the international arena. With an eye towards both Europe and the U.S., he helps audiences understand the profound importance of promoting freedom and peaceful co-existence among nations, while reflecting on the challenges facing the free world: terrorism, the global economy and nation building.

Hands-On Economic Experience: Serving as chief secretary of the treasury and chancellor of the exchequer prior to becoming prime minister, Sir John delivers the experienced insights of a hands-on global economist, sharing with audiences the indicators that signal shrinking and thriving economies.

A Will to Lead: Sir John had little formal education, but through sheer will and talent became a great leader of both Great Britain and on the world stage. With characteristic humor, grace and candor, Major provides lessons about leading a nation of such historic and international significance sharing personal experiences as well as providing examples from other distinguished world leaders.

Author: He is the best-selling author of John Major: The Autobiography, which details his rise from humble beginnings (Major left school at 15, and was at one time unemployed) to political back-bencher to prime minister.