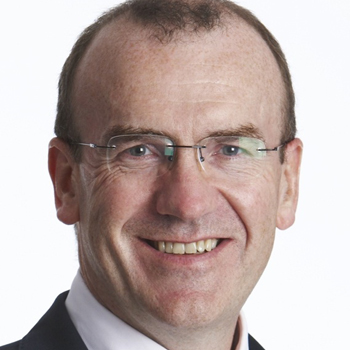 A good company should make sure employees really can work their way up through the organisation, according to Sir Terry Leahy. Former Chief executive of Tesco, he began his retail career while stacking shelves during school holidays.

Knighted for services to food retailing in the 2002 New Year Honours, Leahy is known for transforming the supermarket industry in Britain, growing Tesco to be the largest chain in the country and disrupting the businesses of its competitors. Experts credit Leahy's success to his hands-on style and marketing prowess, while he himself places focus on experience and low-key leadership.

After attending St. Edwards College in Liverpool and earning his BSc (Hons) in management sciences from the University of Manchester Institute of Science and Technology, Leahy joined Tesco in 1979 as a Marketing Executive.

He was promoted to Marketing Manager in 1981, and held the position of Marketing Director for Tesco Stores Ltd. from 1984 to 1986. In 1986, Leahy was appointed Commercial Director of Fresh Foods for Tesco.

As an early testament to his creative leadership and marketing talent, he successfully devised and implemented the Tesco Club Card loyalty programme leading to his appointments to the Board of Tesco Plc as Marketing Director in 1992, and as Deputy Managing Director in February 1995.

Since Leahy became chief executive in 1997, Tesco has taken the lead in Britain and, unlike its domestic competitors, has successfully expanded into other parts of Europe and Asia. His creative leadership enabled Tesco to successfully take risks on new products, store formats and lines of business, including expanding the company's non-food product line.

To Leahy, the customer must come first are words to live by. One day a week, he walks the floor of one of his stores, and is also a regular visitor to those owned by the competition. He takes pride in knowing what the different jobs entail, what consumers are buying and what people want. Highly modest and intensely private, Leahy said to Management Today magazine: The only personality I believe in is Tesco.

Leahy has been nominated by Retail Week as Retail Leader of the Year (2008) and Most Outstanding Individual Retailer (1998-2003), voted as Britain's Most Admired Leader (2005 and 2006) by Management Today, recognised by the Wall Street Journal and CNBC as European Business Leader of the Year (2005) and named European Businessman of the Year by Fortune (2004). A Guardian Unlimited Politics panel found him to be the most influential non-elected person in Britain in 2007.

He was a member of the Prime Minister's Business Council is a Director on the Liverpool Vision Regeneration Board.

Sir Terry is married with three children and enjoys sports, reading, theatre and architecture in his spare time.

Former Chief executive of Tesco since 1997, Leahy is his own best example for his philosophy for a successful business career, having worked his way up from stacking shelves during school holidays. He is known for transforming the supermarket industry in Britain.