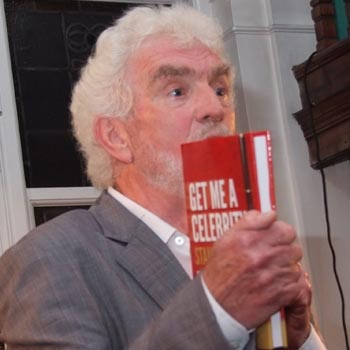 Stanley Jackson is Chairman of F4 Group and a well known speaker who has enjoyed two successful careers; the first in financial services, where he was a leading authority on the use of occupational pension schemes (he was on the board of both Noble Lowndes and Towry Law), and the second in corporate entertainment.
His latest project, The Book of Decamot is a creative writing process that he has co written with his son, Gavin. By using 10 words (hence Deca - mot) it encourages creative writing and helps with the production of short stories and screen plays. The system was piloted in schools in Autumn 2015, and the book was published in early 2016.
Stanley is also the author of "Get Me A Celebrity!", his hilarious account of being a celebrity booker for over twenty years. A seasoned performer, his speech takes the audience through the vagaries of the fame game and the often ridiculous, unreal, world that is dealing with the famous, sometimes infamous, and the companies who book them for everything from speeches to personal appearances.
Stanley is also co-author of a musical based on Charles Dickens' 'Tale Of Two Cities' and has produced two successful shows at the Edinburgh festival for Kate Dimbleby who he managed for two years thus confirming a life long interest in live theatre.

As part of Robert Peston's 'Speakers 4 Schools' initiative, Stanley is currently touring state schools giving talks to students on "the Entrepreneurial Spirit" having set up three successful businesses in a career spanning 50 years. He describes himself as a 'compulsive entrepreneur'

Married for 5 decades, he is the father of 4 children, and grandfather to 5!
"Formal proceedings were hosted by Stanley Jackson who entertained and ensured that the right atmosphere was created for each speaker. In addition Stanley ensured that we kept to a very tight timed schedule."   BAPC Annual Conference - January 2014
"Everyone enjoyed Stanley's talk very much. He made us all laugh and was very kind in giving out copies of his book. A success!"   Cultural Breaks New Year lunch - January 2014
"Just read your book - highly enjoyable. I didn't realise how much you have achieved in your life.(love the Jo Brand story)"   Gerald Ratner - August 2013
"Thanks again for your contribution, which was very well received.  I think you hit just the right note and the presentation of a signed copy of your book was a nice bonus!!"  Touchwave Media's praise for Stanley's after dinner speech at the Motor Driven Systems Dinner - November 2011
"He may sound like Tommy Cooper, but he knows how to focus on business issues."  Sidney Bobb of The British Association of Print and Communication
I am really enjoying your book - A LOT"  Pen Hadow - Polar explorer - November 2011