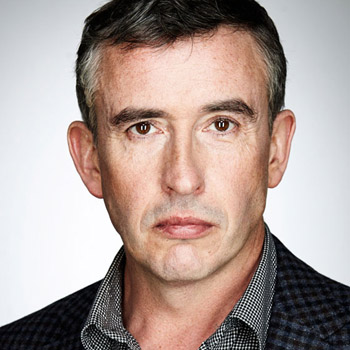 Steve Coogan was born and raised in Middleton, Manchester.  With brothers Brendan (an MUTV presenter) and Martin (ex-lead singer with Mock Turtles), Steve had to fight for the limelight even at an early age.

He trained as an actor at Manchester Polytechnic School of Theatre, and started out on the stand-up comedy circuit while still at college. This was what allowed him to get his Equity card. Coogan's luck was in, because he was spotted by a television talent scout, and appeared as an impressionist on shows like "First Exposure", "A Word in Your Era" and "Paramount City".

He also provided a selection of voices for Spitting Image and was involved with the BBC radio show, "On The Hour", where he created the character that was to make him a millionaire... Alan Partridge.

This character took off to such an extent that he was given his own radio slot, the spoof chat show "Knowing Me, Knowing You with Alan Partridge", and both shows transferred to TV - with huge critical and audience acclaim.

In the late nineties the hapless presenter found himself relegated to the graveyard shift on Radio Norwich for the sitcom "I'm Alan Partridge".

But this wasn't the limit of his creations - he also brought us Paul and Pauline Calf, the appalling travelling sales rep Gareth Cheeseman, and the "singing sensation" cabaret star Tony Ferrino, a legend in his own dressing room.
Steve collaborated with Chris Morris and Armando Iannucci on the Radio 4 comedy show 'On the Hour' follwed by his own radio show, as well as appearing on TV in 'The Day Today' and his own chat show, 'Knowing Me Knowing You with Alan Partridge'.

He won the coveted Perrier Award at the Edinburgh Festival in 1992, went on a sell-out tour of the UK in 1998, was named the Variety Club Showbusiness Personality of the Year in 1999, and managed, throughout the decade, to scoop up and armful of other major awards.
Along with writing partner Henry Normal, Steve founded Baby Cow Productions in 1999. They have been the executive producers for 'The Mighty Boosh', starring Noel Fielding and Julian Barratt, 'Nighty Night' starring Julia Davis, 'Marion and Geoff', starring Rob Brydon, and Human Remains, starring Davis and Brydon.
In 2008 he took to the road on his first stand-up tour in ten years "Steve Coogan as Alan Partridge and other less successful characters".
In November 2011, Steve Coogan, along with Hugh Grant, gave evidence to the Leveson Inquiry on phone hacking, favouring regulation of the press.
Away from comedy, Steve Coogan has played more dramatic roles, with What Maisie Knew, and portrayed Paul Raymond in the biopic The Look of Love. The feature film, Alan Partridge: Alpha Papa, was released in 2013 and with journalist Martin Sixsmith he co-wrote, produced and starred in the film Philomena, alongside Judi Dench.

Steve lives in London and Brighton, although he comes back home regularly to see his beloved Manchester United and his daughter, Clare.
Read More