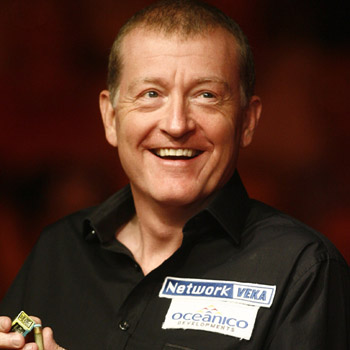 Steve Davis has won a total of 28 ranking and 73 professional tournaments in his career. That's a highly impressive 73 wins from 99 finals.  His most important wins are the six World Championships, six UK Championships and three Masters.

Steve turned professional in 1978 and just three years later he was ranked Number 1.

He was the top player in the eighties and was the first to make a ratified maximum break in a major tournament when he had a break of 147 against John Spencer in the Lada Classic at Oldham, Greater Manchester on 11 Jan 1982.

In his prime, Steve Davis was like a machine, rarely making mistakes. He became known as Steve 'interesting' Davis, as his error-free style contrasted sharply with the likes of Jimmy White and Alex Higgins, who were great potters of the ball, but lacked Davis's disciplined approach.

Steve has written a book on chess, and has been seen playing poker on television along with the likes of Stephen Hendry.

In December 2009, he was co-opted on to the board of the World Professional Billiards and Snooker Association, at the same time as Barry Hearn became the new chairman.

In April 2010 Steve Davis surprised many people by beating John Higgins to reach the quarter-finals of the World Championship although he didn't manage to get into the semi-finals.

Steve is also a regular DJ on radio in Essex and did a set at the 2016 Glastonbury festival, playing techno, electronic and IDM (Intelligent Dance Music).

Steve`s likeable nature coupled with his dry sense of humour and catalogue of hilarious anecdotes make him a excellent choice for any sporting dinner or corporate function.