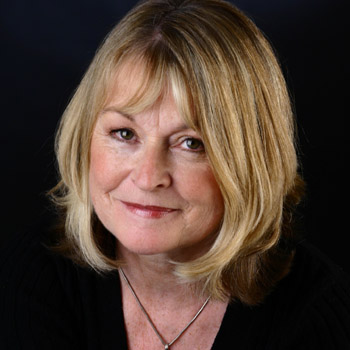 Sue Cook has worked in both radio and television.

A graduate of Leicester University, she gained a BA Honours degree in psychology, and in 1997 the university awarded her an honorary DLitt in recognition of her contribution to broadcasting.

Sue Cook's broadcasting career began as a producer, presenter, and DJ for London's Capital Radio before moving to the BBC where, over the next twenty years, she presented programmes for both radio and television”notably, You and Yours, Making History, Nationwide, Breakfast Time, We're Going Places, Children in Need, Out of Court and Crimewatch. Other BBC TV presenting credits include Pebble Mill At One, Daytime Live, Omnibus at the Proms, Having a Baby, Out of This World and the Children's Royal Variety Performance. She was a regular guest on Call My Bluff, and a member of Holiday's team of reporters. For Channel 4 she hosted the popular afternoon show Collector's Lot.
Her novels, On Dangerous Ground (2006) and Force of Nature (2009), were first published by Hodder Headline. She has also devised and now presents a supportive series for writers, The Write Lines, for BBC Oxford and is a patron of the annual Chipping Norton Literary Festival.
Read More