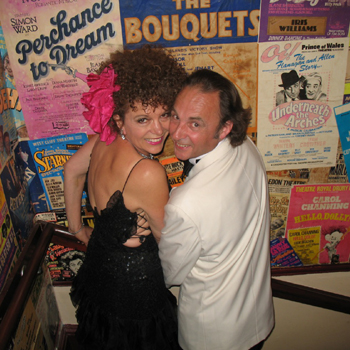 The Totties are Paul Smith and Carolyn Allen. Carolyn is an actress and opera singer while Paul is a professional musician, conductor and musical director. Together as The Totties (formerly Opera Tottie), they perform non serious opera works, with the emphasis on fun and frivolity. If you like opera you'll appreciate them and if you hate opera you'll love them, as it's all very tongue in cheek!

They provide sophisticated musical cabaret, be it numbers from the American song book, or skits on well known Opera. From Tosca in 7 mins, to a specially written repertoire for your company, you can be sure of a highly polished, first class performance from Opera Tottie!

Carolyn's concert, cabaret and corporate work has taken her all over the world, from Orlando to Prague via Amsterdam, Germany, Knebworth House, Hatfield House, Hampton Court Palace, The QE2, Canberra, The Hackney Empire, George's Club Mayfair, The Queen Elizabeth Hall, Brewer's Hall City of London, The Hurlingham Club and The Bluebird Restaurant Kings Road where she performed her cabaret OperaTottie with Paul Smith.

Among her television appearances she most memorably played Vonny the sexy stripper and snake charmer in Only Fools and Horses and Carol in The Upper Hand.

Carolyn's West End credits include Ray Cooney's famous farces, Two Into One as Jenny Bristow and Ida in See How They Run.

He has worked as musical director in the West End on Godspell, Stop the World I Want to Get Off, Oklahoma!, Rosencrantz and Guildenstern are Dead at the National Theatre, Paint Your Wagon, The Tempest and Gentlemen Prefer Blondes in Regents Park. Paul was musical director for Howard Goodall's new musical Days of Hope as well as for Danny La Rue, Ronnie Corbett and Anthony Newly on stage and on television.

His cabaret and concert work has taken him all over the world playing and conducting for Carolyn Allen, Pam Ayres, Sheila Steafel and Janie Dee. He has a lifetimes experience in Victorian Music Hall and has played and arranged shows world wide. He was resident musical director at the Players Theatre for a number of years. He is a guest conductor for the British Festival Concert Orchestra for their classical and contemporary concerts.

Paul is currently enjoying being part of OperaTottie with Carolyn Allen.

The Totties are Paul Smith and Carolyn Allen. Together as Opera Tottie, they perform non serious opera works, with the emphasis on fun and frivolity. If you like opera you'll appreciate them and if you hate opera you'll love them, as it's all very tongue in cheek. They can also write and perform a special one off piece about the company/directors etc (exact content up to you of course).