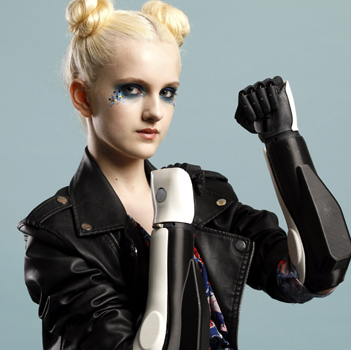 Being described as a real-life superhero, the now 13-year-old girl Tilly wants it all and sparkles at the thought of what the future will bring…Actor, Model, Presenter, Social Influencer, Make-up Vlogger…you name it, that girl will achieve it!

Aged just 15-months, little Tilly Lockey was diagnosed with Meningococcal Septicaemia which resulted in her losing both her hands and toes.
Now the County Durham teenage schoolgirl says: ‘I want others like me who are having a hard time to know you can fight back and there are no limits to what you can do.’ ‘It’s much better to stand out,’ she says. ‘Blending in with everyone else is really boring.’

Working as an Ambassador and collaborating with Open Bionics in the UK, for the state of the art HeroArms, Tilly is travelling the globe spreading her inspiration, positivity and sharing awareness for others who require replacement prosthetics with this fully functional bionic arm to fellow amputees.

Tilly is not only an inspiration but has a unique confidence and drive that pushes her to want to
achieve her dreams. She is embracing speaking and appearing at inspirational events, TV shows, modelling in many different countries and wants to take on the world.

She is determined to confront and beat any obstacle in her way.

A real life bionic girl! Having suffered with meningitis at 15 months, Tilly had to have her hands, forearms and toes amputated. Now travelling the globe and inspiring millions of people with her positivity, determination and drive.