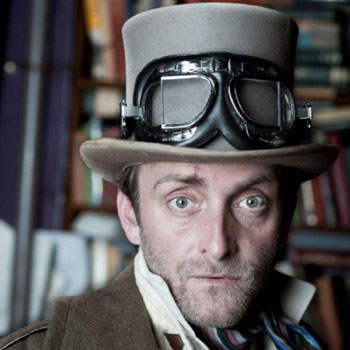 In 2004 Tim set off on his latest adventure: To become the first man in history to row the English Channel in a Bath. This mission was televised all over the world and reported in Metro, but here for the firsttime is the full story in his own words.
His time with the Olympic gold medalist rowers Pinsent, Cracknell, Williams, and Partridge, his presents from Sir Ranulph Fiennes, Dave Gorman, Chris and Ingrid Tarrant, and the famous bath launch by Thomas Crapper are all told in this blended mixture ofstand up and stories. Plus the remakable tale of how His Majesty King George V's travel bath with the silver taps, Tim, and various other celebreties narrowly avoided becoming bound up in international fraud is told here frankly and very funnily as Tim talks of his time in the bath.
Tim is much in demand as an after dinner speaker both here and abroad. He has toured the UK, Switzerland, the Mediterranean and the Caribbean giving speeches and making people laugh. He's given speeches to Aldermen and Livery Company Masters in the City of London, many of London's top companies, the National Maritime Museum, the River and Rowing Museum, given the centenary lecture at St Chad's College, Durham and been a spokesman for the United Nations World Environment Day.
Tim's hosted many Awards Ceremonies, Events and Charity Galas; including the Whyte and Mackay Earls Court Boat Show, the Walk With Cancer Ball (for Institute of Cancer Research) and the Gala Evening for Great Ormond Street at the Aldwych Theatre. He is also an experienced charity auctioneer.
When not talking about all things baths, he also appears in a tribute to Flanders & Swann Act. Click here for more info.
Read More