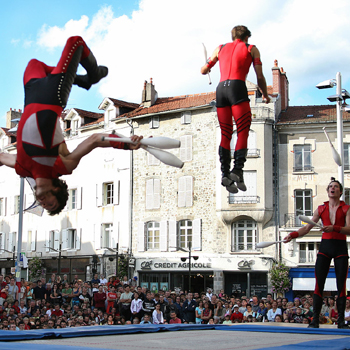 TnT Crew presents crossover circus shows which tour all over Europe throughout the year. These shows provide a refreshing and energetic mix of juggling, acrobatics and dance, humour, and improvisation.

The company was formed in 2002 and since then they have played over a hundred shows annually in fourteen different countries. These are 'feel good shows' which can be played at all sorts of venues and events before a varied audience of all ages.

The Belgium-based circus has a variety of different shows for amazing, high quality corporate entertainment, suitable for all ages and venues.

Just Another Boyband? They may look like a Boyband but these are impressive jugglers with clubs and diabolos who incorporate dance to playback in their act.  The fans are likely to scream as this show combines a humorous mix of Boyband style, juggling and acrobatics. The group performs on, around and above an elevated scaffolding.  Suitable for all ages.

Trampoline Mission 3 -  Three circus artists bring a spectacular street show that catches the attention with a never seen before combination of juggling stunts, maxitrampoline-acrobatics, street theatre and slapsticks. Using the motto 'the sky is the limit', they fly and tumble through the air. This trio cannot live with or without one another. One moment they challenge each other by performing stunning performances..