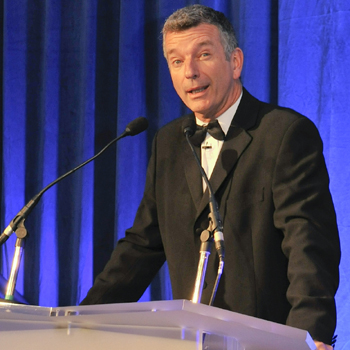 Tony Hawks is a TV and radio comedian and bestselling author.

He is the author of the bestseller Round Ireland with a Fridge - the story of his absurd quest to hitch round the circumference of Ireland within a month... with a fridge. The book became a top 10 Sunday Times bestseller in 1998, was serialised on BBC Radio 4, and led to a six month TV advertising campaign for HARP Irish Lager. It has now sold over 300,000 copies worldwide including the US and Australia, and has been translated into several languages including Hebrew, Italian, Dutch and German.

A film of the book starring Tony, and featuring cameos from the likes of Ed Byrne and directed by Red Dwarf's Ed Bye was released in 2010 and is available on DVD.

His second book Playing the Moldovans at Tennis, published in trade paperback by Ebury Press has now sold well over 100 thousand copies. The book was serialised on BBC R4 over Christmas. The story charts his latest foolhardy attempt to win a bet, which involved tracking down all the members of the national football team of Moldova and beating them at tennis one by one. Tony's book was shortlisted for both the Samuel Johnson Prize (2000) for non-fiction writing and the Bollinger Everyman Wodehouse Prize (2000).

He has appeared frequently on TV comedy programmes such as: Have I Got News For You, They Think It's All Over, Paul Merton, A Bit of Fry and Laurie and Red Dwarf. He also hosted the BBC1 programme, The Best Show in the World Ever ... Probably.

Tony Hawks is a regular guest on radio programmes including The News Quiz, Just a Minute, and I'm Sorry I Haven't A Clue, and recently he presented his own series on Radio 4, Tony Hawks' Lost Weekends.

Tony is a regular after dinner speaker at corporate events up and down the country and his warm, dry style and aptitude for ad-libbing makes him a popular choice as a host for award ceremonies. He has hosted The PPG Travel Awards with Joanna Lumley, The British Book Awards, The Property Awards, The Security Excellence Awards, The Houseware Awards, The Beauty Awards and The Packaging Awards, with many of the satisfied clients having taken the opportunity to make a return booking.
"Tony was very funny and spontaneous. We are really pleased how successful the event in Manchester was."  Tony hosted the RICS North West Awards - May 2012
"Tony was a great host and ensured that the evening ran smoothly and on time!"  RICS North East Renaissance Awards - April 2012
"Tony was great and the MPs and Lords really liked having their photos taken with him. His speech was excellent and it was really appreciated that he could spend so long at the event before and after the speech."  Tony gave a speech at the launch of the Libraries All Parties Parliamentary Group for CILIP - December 2011
Read More