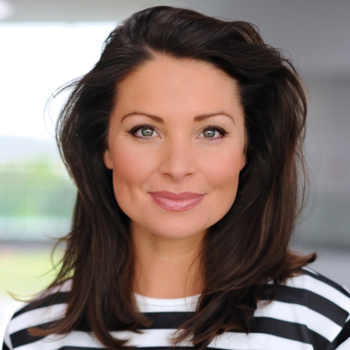 Torie is a Presenter and Sports Reporter who loves a challenge and is more than happy to chat to the camera from a helicopter, whilst driving a powerboat or from the terrifying press pit of a red carpet!

Torie is a regular on our screens and a familiar voice on the radio, regularly contributing F1 punditry for Love Sport Radio along with guest appearances for BBC 5 Live and on the BBC Breakfast sofa.

Torie fronted ‘One Second in F1 Racing’, a series for CNBC which aired to a global platform. The series took a look inside Formula One from both a business and sporting angle. Torie has become a familiar face within the sport and has had the opportunity to get access behind the scenes spending time with and interviewing some of the leading personalities and sporting legends of Formula One. She even got to spend time with Sir Jackie Stewart in his UK home during an interview for CNBC.

Working within Formula One for many years, Torie has written and presented online films, provided commentary at the GPs and hosted several teams’ hospitality stage areas. Alongside F1, Torie has experience with the DTM Series, Drifting and Formula4 Stroke.

Her experience and professionalism have seen her host live events to audiences in their thousands, and she loves the thrill of a live broadcast. Torie has fronted several live-streamed social media campaigns, including a live feed whilst driving through Paris’s streets explaining hybrid technology and most recently from the Goodwood Festival of Speed. At the Goodwood Festival of Speed, Torie interviewed Formula One driver Valtteri Bottas and World Champion Nico Rosberg, reaching over 300k views for the Mercedes Benz official’s live feed Facebook page.

A bubbly and good natured host!

Through Torie’s involvement within motorsport, particularly Formula One, she has gained excellent knowledge and expertise in the vehicles’ technical side. She has written and presented films about developing the latest engines in Formula One and has been championing the movement to electric cars and a more environmentally sound solution to road cars for many years. Torie has worked with many of the worlds largest car manufacturers. For many years, she was the lifestyle presenter for Mercedes Benz, where she test drove and reviewed new and concept cars and covered lifestyle events worldwide. The success and popularity of these films gave Torie a stepping stone into Motoring journalism. She has written and presented for several websites and brands, including AutoTrader (one of the UK’s largest car sites/magazines) and Men and Motors. She has also attended and reported from some of the Worlds leading Car shows held in China, the USA, Europe and the UK.

Torie grew up on the South coast in a ‘sports mad’ family, which gave her the perfect grounding to host numerous sporting events. These include the Formula4 Stroke series for ITV4 and ITV1’s Saturday Sports programming, the GB round of the World Powerboat Championship for Sky Sports, London International Boat Show, Navy shows, and UK Air shows. Torie hosted the press launch for the FIFA Women’s World cup alongside Sepp Blatter and has interviewed some of the biggest names in sport on the Red Carpet at the Laureus World Sports Awards (talking to Sir Steve Redgrave made her dad particularly proud!)