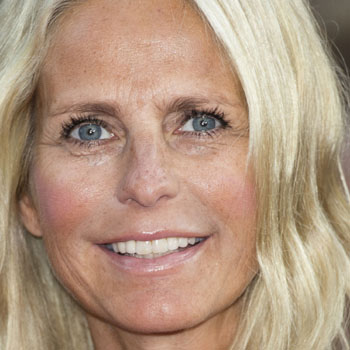 After working as a secretary, Ulrika Jonsson began her TV career on TV-am in 1989 where she worked as a weather forecaster. She was also the weather forecaster for Swedish TV3, broadcasting from London. In 1992 she moved into mainstream presenting and played host to numerous shows including Gladiators, the Big Breakfast, The National Lottery - plus the Eurovision Song Contest and Miss World in 1998. She modelled for Playtex lingerie and was a team captain on the BBC TV quiz show Shooting Stars.

In 1990 she married TV cameraman Johnny Turnbull, but a few years later had an affair with Gladiators cameraman Phil Piotrowsky. She got back together with Turnbull, and they had a son, Cameron; however they divorced in 1995. She later had a relationship with James Crossley, better known as Gladiator Hunter.

She spent many days on the front pages of the tabloids in 1998 after it was revealed she was the victim of domestic abuse at the hands of her then boyfriend, footballer Stan Collymore. Jonsson later took out an injunction preventing Collymore from releasing a sex tape, apparently made while they were on holiday in Cyprus.

In 2002 she had a widely publicised but short-lived relationship with England football team manager Sven-GÃ¶ran Eriksson. The event caused a tabloid frenzy as Eriksson had a long-term girlfriend - Nancy Dell'Olio - at the time. He later spurned Ulrika for a reunion with Dell'Olio.
In 2002, Jonsson presented TV makeover show Home On Their Own, where children made changes to their house during the course of a weekend while their parents went on holiday.

In 2003, Ulrika was a contestant on the BBC's Comic Relief does Fame Academy and in 2005 she appeared on Channel 4's Come Dine With Me. In 2007 she took part in Dancing On Ice on ITV, where she was partnered with Pavel Aubrecht. With previous experience of skating in Sweden, Ulrika was expected to go far in the event but finished 9th.  In 2007 'Ulrika: Am I A Sex Addict?' was broadcast on Channel 4 and she also appeared on BBC1's Would I Lie To You?
Read More