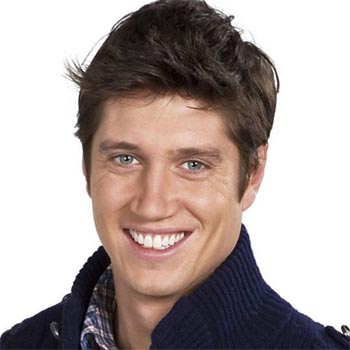 Vernon Kay is the lad from Bolton who created quite a stir within the television industry. His spontaneous wit and charming accent make him a huge hit with both male and female viewers of all ages.

Vernon has a vast amount of presenting experience both live and pre-recorded. His first taste of fame was a few years ago when he was spotted by a model scout from Select at the BBC's 'Clothes Show Live'. He began a successful modelling career but it was not long before he was picked out for stardom by Channel 4 when he won 'Model of the Week' on The Big Breakfast.

Vernon was the co-presenter for BBC2's Top of the Pops Plus which was a Pops branded show, in addition to fronting the spin off series Top of the Pops @ Play for Play UK. The shows were music based formats with live band performances and interviews with entertaining viewer interaction

Vernon hosted the BBC's youth magazine show FBI which has raised his profile in addition to guest presenting at T in the Park T4. He gained exposure when he co-presented Channel 5's live magazine format The Mag and reporting for Trouble Television

Vernon proved himself as a relaxed and enthusiastic host whose spontaneity was crucial in the live shows. He enjoyed success as part of the T4 team on Channel 4 which he hosted for a number of years, leaving in 2006. Vernon also presented Hit Me Baby One More Time on ITV and NBC (USA). Other shows that Vernon has hosted include: Head Jam (BBC2 / BBC3), Celebrities under Pressure (ITV1), Wife for William (E4), The Grill (Channel 4). Prior to this, Vernon hosted the Saturday night show Boys and Girls on Channel 4. As well as his onscreen success', Vernon joined Radio1 in 2006 & continues to host 10-1pm on Saturdays for the station.

During 2007, Vernon hosted a variety of shows for both BBC1 and ITV1 he started the year by co-hosting the live celebrity singing show Just the Two of Us (BBC1) working alongside his wife, Tess Daly. In the spring, he took over as the host of ITV1 hit show Gameshow Marathon. Being a massive fan of Elvis, he jumped at the chance of spending his summer travelling the globe attempting to find The World's Greatest Elvis (BBC1).  He is the regular host of the massively popular 'All Star Family Fortunes' for ITV1.

A natural on screen, in 2008 Vernon signed an exclusive 2 year deal to ITV where he continues to host a variety of prime time entertainment shows for the channel including Beat the Star and All Star Family Fortunes.