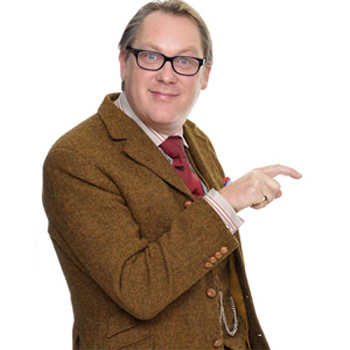 Born James "Jim" Moir in Leeds, Vic is best known for his surreal sense of humour and his double act with Bob Mortimer.  He supposedly derived the name Vic Reeves from two of his favourite singers, Vic Damone and Jim Reeves.
After school, he was an engineering apprentice before moving to London and becoming a factory inspector. But as well as working and performing in bands in London, he also joined the alternative comedy circuit under many different guises.
It was at one of these gigs that he met Bob Mortimer, a solicitor who jumped up on stage one night and ended up joining the show. Vic's television debut came in 1989 on One Hour with Jonathan Ross and his growing TV profile led to Big Night Out being given a slot on Channel 4 the following year.
It was about this time that Vic and Bob rented a back room at Jools Holland's office in Greenwich where they would spend hours writing material.
Vic Reeves continued to work with Bob Mortimer as a comedy duo in The Smell of Reeves and Mortimer, Shooting Stars, and Bang Bang, It's Reeves and Mortimer.
His track record on TV, with and without Bob Mortimer, is extensive including such shows as Celebrity Come Dine With Me; Dangerous Adventures for Boys; Would I Lie to You?; 8 Out of 10 Cats; Vic Reeves Investigates Jack the Ripper; Brainiac and Never Mind the Buzzcocks. He was also the subject of a programme in the BBC series Who Do You Think You Are?
In 2003, he and Bob Mortimer were listed in The Observer as one of the 50 funniest acts in British comedy. In a 2005 poll to find The Comedian's Comedian, he and Bob were voted the 9th greatest comedy act ever by fellow comedians and comedy insiders.
Read More