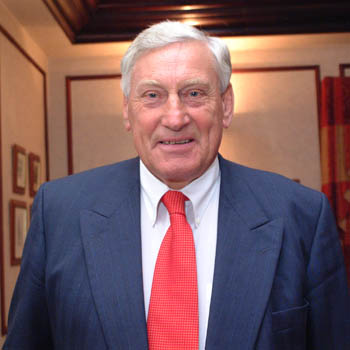 Educated at Ballymena Academy, Northern Ireland, Willie J McBride was the boy from Ballymena who became the captain of Ireland and a British Lions legend.

During an international career which lasted from 1962-1975, Willie John played in a record 17 tests for the Lions and was capped 63 times, (12 as Captain) by Ireland.

In an era when the robust physical play of the All Blacks and Springboks dominated, McBride was the only Forward from the Home Countries who was their match.

His outstanding leadership qualities led to his being appointed Captain of the 1974 Lions in South Africa and following retirement he went on to coach Ulster from 1981 to 82.

He was the manager to both the British Lions tour to New Zealand in 1983 and the World XV tour to South Africa during the South Africa Rugby Board Centenary Celebrations.

He was awarded the MBE for services to Rugby Football in 1971.

Interested in all sport he is an accomplished motivational and humorous after dinner speaker.