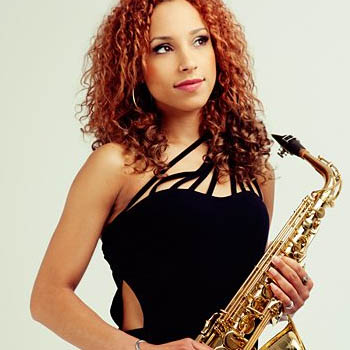 Yasmin Ogilvie studied at Trinity College of Music where she achieved a First Class Honours Degree studying with Gerard McChrystal and Mark Lockheart. While studying, she often gave her own recitals and performed with jazz, classical, rock, Latin and Big Bands as well as being selected as a soloist with the Trinity Sinfonia and 1st Alto of the National Saxophone Choir of Great Britain. She played in the Trinity College of Music Improvisation Festival along side Mick Foster where they improvised freely with dancers and has performed Philip Glass’ ‘Facades’ for two soprano saxophones and String Orchestra with Gerard McChrystal. Yasmin was offered a place at the Prins Claus Conservatorium in Holland on the Socrates ERASMUS exchange programme where she studied for one year with Peter Stam, Don Braden and Mark Gross and was involved in the Philip Glass Festival that took place in the Netherlands.

Yasmin has a keen interest in collaboration and has performed works with dancers and artists in exhibitions. She has recorded at Maida Vale Studios for BBC Radio 1, Abbey Road Studios and Pinewood Studios and toured internationally as a live artist for well- known dance brands ‘HedKandi’ and ‘Ministry of Sound’. Yasmin is a member of ‘High On Heels’ where she performs in venues and festivals worldwide. She also plays in the Astraeus Saxophone Quartet, SO Duo, Freestyle funk Collective, Tricity Vogue Swing Band and performs in concerts, corporate events and private parties for large companies including Dolce & Gabbana, Microsoft, Jaguar, Land Rover, Glaxo Smith Kline, Canary Wharf Fashion Show, Chelsea FC, Barbarian FC, The London Marathon and the ‘One Night In Istanbul’ Film Premier.