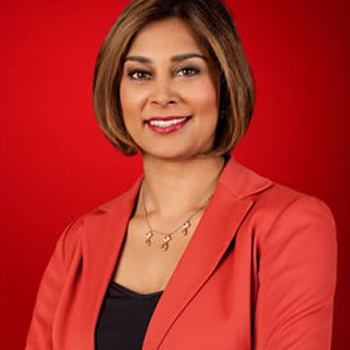 Former Anchor for CNN's World Report, based in the network's London bureau. Zain spent 14 years as CNN Anchor before setting up her own media production company with bases in New York and Nairobi.

Zain is the former anchor for CNN World Report and also hosted 'i-List' a special monthly programme which focused on a different country each month and looks towards its future, highlighting innovation and influence in business, industry and culture.

Prior to this news assignment, Verjee was the anchor for World News from London and presenter for the Washington DC-based 'Situation Room'.   She was a news reporter and she interviewed a number of  prominent foreign policy thinkers.

She has travelled with Secretary of State Condoleezza Rice to more than a dozen countries, including Israel, Turkey, Libya, Russia and South Korea.

During her time in Washington DC, Verjee launched an innovative series called 'The New Diplomat' which looked at the dangers and challenges faced by American diplomats.

Zain returned to her native Kenya in 2008 to cover the post-election violence and spent several weeks there covering the international community's response to the hostilities.

Before joining CNN Zain produced and presented documentaries for the Kenyan Television Network,  hosted The Third Opinion, a political talk show, and freelanced for the BBC, producing a documentary 'African Perspectives'.

She has covered numerous breaking news stories, including the India-Pakistan Agra Summit, the trial of Slobodan Milosevic, the 9/11 terrorist attacks, the Hajj and the war in Iraq.

She has had book published called 'Live and On the Air', a children's book about a young girl who moves from rural Kenya to Nairobi to work as a broadcaster.