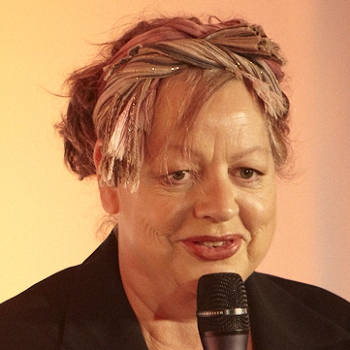 Since leaving her job as a psychiatric nurse in 1987, Jo Brand has built a large following across the UK, male and female alike appearing initially on the Saturday Live television show.

In 1993 she became a resident panellist, along with Tony Hawks, on BBC monologue show The Brain Drain. Soon after, her hit " Through the Cakehole" (Ch4) series met with great acclaim, as did her series " All the Way to Worcester" (Ch4).
Jo's diverse appeal is marked by appearances on such eclectic TV programmes as " Question Time" (BBC) to " Nevermind the Buzzcocks" (BBC) and " Countdown" (Ch4) to " They Think It's All Over" (BBC) and The Graham Norton Show (BBC).  She presented " Jo Brand's Commercial Breakdown", " Jo Brand's Hot Potatoes" and " Jo Brand's Rudest Home Videos" and has guest hosted " Have I Got News For You".  She also appeared in a fantastic cameo in Absolutely Fabulous. In 2007, Jo narrated Laughter & Tears: The Les Dawson Story, a documentary tribute to Les Dawson.
She took part in the first celebrity version of Comic Relief does Fame Academy, and then in 2007, she appeared as a celebrity contestant on Comic Relief Does The Apprentice.  In 2009 she participated in Let's Dance for Comic Relief, another Comic Relief fundraiser, dancing as Britney Spears, reaching the final.
She has proved herself an un-willing fashion victim on the BBC1 special " What Not To Wear On The Red Carpet", learnt the organ for BBC's " Play it Again", which she then played to a sell out crowd at the Royal Albert Hall, and she has also taken part in a charity celebrity carol singing choir!
She appeared as a judge in the BBC2 series The Speaker in 2009. She offered her advice, along with John Amaechi and Jeremy Stockwell, in the eight-part series charting the search for " Britain's Best Young Speaker''.
She co-wrote and starred in the utterly marvellous, Getting On, in 2009, a series, set on a hospital's geriatric ward, that was partly inspired by her earlier career in nursing.
A critically acclaimed writer, Jo has written the hits 'A Load Of Old Balls' and 'A Load Of Old Ball Crunchers' (both Simon & Schuster), 'It's Different For Girls', 'Sorting Out Billy' and 'The More You Ignore Me' (all for Headline Review). She has written three autobiographical books, 'Look Back In Hunger', 'Can't Stand Up for Sitting Down' and 'The More You Ignore Me'.
Long established as one of britain's best female comics, Jo is also a hugely popular host and cabaret artist for corporate events.
"The audience loved her.... Jo had clearly undertaken research about the sector and made what is not the most exciting subject absolutely hilarious. She is so talented and extremely funny. We were really impressed with how flexible she was on the timings and generous in spending time with members of the audience, giving autographs and having photos taken. We would 100% recommend Jo to anyone thinking about asking her to host awards...value for money and pure entertainment!   Jo hosted the Affordable Home Ownership Housing Awards for Event-X Ltd, September 2011

Popular comedian and actress who has been on everything from Question Time to Have I Got News For You, Live at the Apollo etc. A safe pair of hands for corporate events who knows the boundaries.