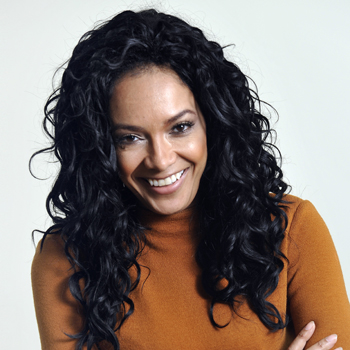 Kanya King is the founder and CEO of  the MOBO Organisation, launched in 1996 to celebrate and celebrate urban music. She now employs hundreds of people and The MOBO Awards is Europe's largest urban music awards show, attracting the largest primetime multicultural audience of over 250 million people around the world.

With a Ghanaian father and an Irish mother Kanya was the youngest girl in a family of nine children.  Her parents wanted her to become a teacher but instead she left school at 16 and became a single mum.  She went on to university, studying drama and English at Goldsmiths, but didn't manage to attend enough lectures. It wasn't  that she was out partying - she had a mortgage and a young son and was trying to balance it all and pay the bills.

Whilst working as a television researcher she got her chance to stage the first Mobo awards. In 1996, she finally got a broadcast slot on Carlton Television but had just six weeks to set up the event. She jumped at the chance. When you get opportunities like that you just have to grasp them. It wasn't a question of whether I should do it but how can I do this? She remortgaged her house, set up an office in her bedroom and enlisted friends to help.

She proved just how much can be done in six weeks, when the first Mobo awards show took place at the New Connaught Rooms in London. Lionel Richie headlined and Tony Blair, then leader of the opposition, was in the audience. It was a massive success and a year later the awards moved to the Royal Albert Hall. It has since become a fixture in the music industry featuring major artists like Tina Turner, Justin Timberlake, Kanye West and Amy Winehouse.

Kanya had always harboured an ambition to start her own business but the careers advice she was given at school was to be more realistic and she could be a manager in Sainsbury's Not that it wouldn't have been an honourable career, but it just wasn't what I wanted. she says.

Her ability to juggle jobs and knack for spotting business opportunities and her passion, persistence and enterprising mind were her key assets. I didn't have the skills that you would normally need to set up a business, I didn't go into a sector I was familiar with and I didn't have the guidance of an accountant or a legal person in the family, she says. I learnt on the job and you learn very quickly, but sometimes it is the best way to learn”by actually doing.

Although still deeply involved with the day-to-day running of the business, King recognises this will change as the organisation expands further. We will be doing an international event in the future. We engage with people from across the world on our website so is not just about the UK anymore.

Kanya's sheer passion and dedication is clear. This was highlighted a few years ago when the Queen invited Kanya to stand alongside JK Rowling and Cherie Blair at Buckingham Palace to celebrate exceptional achievements by British women and presented her with an MBE.
A superb keynote speaker and an internationally recognised entrepreneur and innovator in the British music industry, Kanya King has addressed audiences including the Metropolitan University, Morgan Stanley, British Library and Scottish Institute for Enterprise.

Founder and CEO of the MOBO Organisation, Kanya is also recognised as a superb keynote speaker, an internationally recognised entrepreneur and innovator in the British music industry.