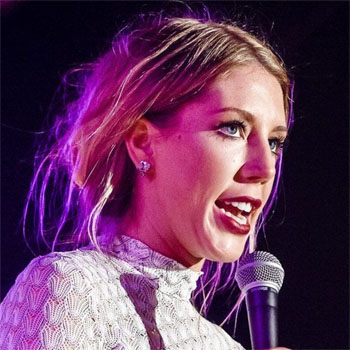 Canadian stand-up comedian, writer and actress based in London.
Whilst at University Katherine Ryan worked as a waitress, working her way up to become a corporate trainer.  Her comedy career took her from the comedy club circuit in Canada to the UK, as well a performing in the world famous Comedy Store in Los Angeles.
Katherine has a style of her own, with her distinctive voice and a wholesome sweetness that is in contrast to her often edgy comedy material.
She has appeared in TV comedy programmes and panel shows including Mock the Week, 8 Out of 10 Cats, Never Mind the Buzzcocks, QI and Have I Got News for You. She's co hosted two series of Your Face or Mine with Jimmy Carr, while she recorded a Netflix special based on her previous tour 'Katherine Ryan In Trouble: Entitled to Everything'.
She has performed at 'Live at the Apollo' with Jack Whitehall and Rich Hall and she was voted to the final of BBC One's 'Let's Dance for Comic Relief' after a hilarious impersonation of Nicki Minaj performing Starship.
As an actress Katherine has featured in the Channel 4 sitcom 'Campus' and in 'Episodes' and 'Don't Sit In the Front Row' with Jack Dee on BBC2.
'Superb! Tempted to book her for next year right now.'
A financial awards in May 2018
"The event went very well. We are extremely happy with Katherine Ryan and Alice Baxter - they have done an amazing job!" Women in Compliance Awards - March 2015

Canadian stand-up comedian, writer and actress based in London. A regular on Mock the Week and the usual comedy panel shows.