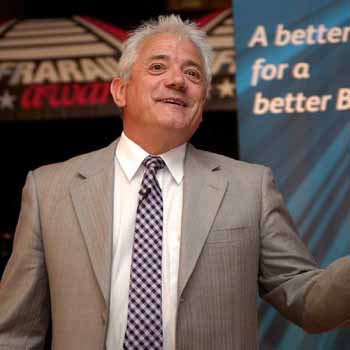 An incredibly passionate and renowned communicator, Kevin Keegan is one of the most recognisable faces in British football. An illustrious playing career included time at Liverpool, Hamburg, Southampton and Newcastle as well as the national side, captaining England for six years until his international retirement after the 1982 World Cup. As a manager he held the reins at Newcastle, Fulham, Manchester City and England.
A highly respected and credible broadcaster, Keegan was signed by ESPN in 2009 to be the Lead Analyst for their Premier League coverage in the UK. He also travelled to the FIFA World Cup 2010 in South Africa to broadcast for ITV.
Born in Doncaster, Keegan began his football career in 1968 at Scunthorpe United, making his debut as a young seventeen year old. He moved from there to Liverpool in 1971 and went on to win three First Division titles, two UEFA Cups, an FA Cup and the European Cup during his six years at the club. From Liverpool Kevin joined Hamburger SV of Germany and secured further honours, winning the Bundesliga title and reaching the European Cup final.
Voted European Footballer of the Year in both 1978 and 1979, his return to UK football came at Southampton where he spent two seasons before joining Newcastle United of the Second Division, helping them gain promotion and finally retiring as a player in 1984. He was capped 63 times for England scoring 21 international goals.
After a break from the game, Kevin embarked on his managerial career, first in 1992 at Newcastle where he returned the club to the top-flight and narrowly missing out on the Premiership title, finishing second in the 1995-1996 season. He was appointed by Fulham from the Magpies in 1997 before accepting the England Manager's job in 1999. Joining Manchester City in May 2001, he led the team to promotion that season as First Division Champions, becoming the first manager in the Premier League era to win the Football League title with two different clubs. Qualification for the UEFA Cup followed before Kevin stepped down in 2005. After a brief return to management with Newcastle he now devotes his time to his business interests and media work with ESPN.
"Kevin Keegan was absolutely outstanding, and we are not saying this lightly!  We are all still talking about him and will be for years to come... he blew us all away with his presence.... such an honour to have him as our guest speaker for the event."  - November 2016
"Thanks to Kevin for all of his hard work last night. The guests LOVED him and would not leave him alone. All night he was friendly and chatty with all of the guests, no matter how much they talked to him. He assisted with the awards, which there were many, and did not complain once! He was  star, and I was hoping you would pass on my thanks to him for the night."  DBMT/Rentokil Guild of Technicians Event - February 2016
"I must say pre booking I was a little nervous about booking Kevin as I am not a football fan!  JJ assured me that he would be fantastic, and he wasn't wrong.  Kevin was one of the best after dinner speakers that I have had the pleasure to watch.  But not only that, he engaged with all my guests, was very happy for photos to be taken and there were lots of them!  He was funny, charismatic, sociable, flexible and a damn good speaker.  I wouldn't hesitate in recommending him top guy and a great speaker!"   In2Global Event Director on Kevin at the Intrarail Awards - May 2014
"Kevin was a dream and a roaring success! He was a perfect choice of speaker for our guests.  Kevin did a fantastic job and it was really special to have him mingling with all of the guests throughout dinner and also after dinner.  You could tell how much our guests admired him.  Kevin worked really hard and was a pleasure to work with he went above and beyond! He stayed for hours taking photos and signing photographs.  We couldn't be happier with Kevin."   DBMT's praise for Kevin at the Rentokil Guild of Technicians Event - April 2014
"Feedback was tremendous. The service was slow and the running order affected and yet despite going on to close the evening, at 11.30pm, Kevin did not complain once and could hear a pin drop in the room. Very well received and in 20 years of running this event client put Kevin in his top 3 speakers of all time." After dinner speech at the Annual Make A Dream Fundraising Dinner - November 2013

Legendary footballer and England international, arguably the best player/manager of his generation. Kevin managed Newcastle, Fulham and England and is keynote speeches are always very well received including insights into teamwork, leadership and man management. He even speaks German following his stints in the country when he won European Footballer of the year.