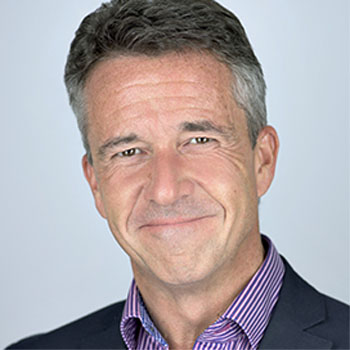 Paul McGee is one of the UK’s leading speakers on the subject of change, workplace relationships and motivation. His book SUMO became a Sunday Times best seller and his book on Self Confidence reached number one in the WHSmith’s business book chart and remained there for a further 24 weeks. He has appeared on BBC Breakfast television and is a regular contributor on BBC Radio.

Paul’s aim is to deliver a practical, relevant message that can make an immediate impact on people’s professional and personal lives.

He’s spoken for more than 1,000 organisations in over 40 countries to date, and from Todmorden to Tehran and from Bradford to Brisbane, Paul’s messages have resonated with a global audience.

He has had the privilege of working with one of the world’s top management gurus the late Dr Stephen Covey and his work has been endorsed by Sir Clive Woodward, who coached England to victory in the 2003 Rugby Union World Cup. Chris Evans has described Paul’s books as “a gift to the world.” His clients include prominent blue chip organisations, public sector bodies and a leading Premiership football club.

Paul joined us on May 28th and delivered his session How to cope in a crisis more details here: https://www.performingartistes.co.uk/podcast-post/14

Paul provides insights, inspiration and practical tools you can use instantly on the following topics:

“In our twenty years of running conferences, Paul McGee is the only speaker we have ever invited back. That above all explains the benefit we feel we have gained from hearing Paul‘s SUMO philosophy.
Specsavers
“I saw Paul present at an international conference. He uniquely addresses one of the biggest barriers to personal and business development... our own minds. The SUMO philosophy was a unanimous hit. Very, very powerful stuff!
Virgin Atlantic

It hit the right note perfectly as a follow on from the activities earlier that day and provided terrific motivation for the ideas session the next day.  I was particularly impressed at the impact on a couple of our hitherto more negative colleagues (mood hoovers to use your language) and their managers have commented on a noticeable change in attitude!  It’s up to us (and them) to keep it up now.All in all a great session and the perfect mix of humour and substance.

One of the UK's leading speakers on the subject of change, workplace relationships and motivation. His provocatively titled book SUMO (Shut Up, Move On) became an instant best seller. Drawing on his degree in social & behavioural psychology, he enables his audience to focus on the elements of their life, be it social or business, that are holding them back from fulfilling their potential. Paul is very much in demand on the international speaker circuit, and is a regular contributor to the media.