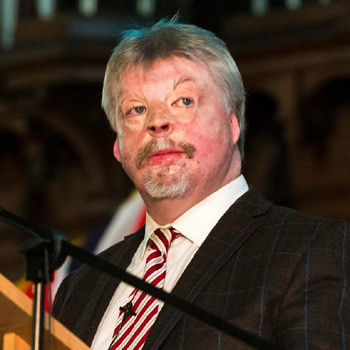 Only a handful of people would have recognised the Simon Weston who headed out for the Falklands Conflict back in June 1982.  But the face of the Simon Weston who returned from the bombing of the Sir Galahad is recognised the world over, not for his disfigurement from 46% burns but for the optimism which he radiates.  His determination has inspired courage and the will to excel in countless others.  And his irrepressible humour, his infectious enthusiasm and his immediately engaging personality have made him the number one choice of many companies who invite Simon back to speak time and again.

A native of Mid Glamorgan, Simon Weston joined the Welsh Guards in 1978 seeing active service in Berlin, Northern Ireland and Kenya before setting off to the Falklands which was to prove the turning point in his young life.

Following his injuries, Simon's road to physical, spiritual and mental recovery saw him active in a number of highly successful ventures including 'The Weston Spirit', a Liverpool-based young people's charity.  He remains a tireless worker for the Royal British Legion and the Royal Star and Garter Home.  His charitable work earned him an OBE in the 1992 Queen's Birthday Honours and he was awarded the CBE in the New Years Honours in 2016.

Television and radio appearances, including the major BBC documentaries Simon's War, Simon's Peace, Simon's Triumph and Simon's Return have been complemented by literary success as a bestselling autobiographer and, most recently, as an author of fiction.

Now married to Weston Spirit volunteer, Lucy and with two children, James and Stuart, Simon Weston's experience is one of triumph over adversity.  The horrific burns which he endured when Argentine planes bombed the troop carrier Sir Galahad, during the 1982 Falklands War signalled the start of Simon's quest to achieve ever greater heights.

Hearing his lilting Welsh tones recount all that he has undergone, the audience is left marveling at the fact that Simon did not allow himself to wallow in self pity.

His message is one of single-minded determination, to not only accept what is, but to turn that to your advantage.  Simon's own career demonstrates clearly that such a positive mental attitude can achieve great business goals.

In September 2013 BBC's One Show's viewers voted Simon their top personality to have a portrait painted.  The portrait has been hung in the National Portrait Gallery.
"Thank you for all your help with organising speakers for our event. Declan and Simon were both outstanding and a pleasure to work with."  Director of Hunters Property Group re. Hunters Property Group Annual Conference - March 2015
"My sincere gratitude for speaking at our annual conference, your presentation was inspirational, interesting, thought provoking and excellently done. We have had very many, very positive comments in the delegate feedback with 72 of 75 respondents rating your talk as 'excellent', a most impressive response!"  Chairing Clinical Director, Wessex Trauma Network - September 2014
Feedback has been fantastic with "totally inspirational" the most frequently used phrase. His presentation was at times both heartbreaking and hilarious and he was extremely generous with his time, patiently posing for selfies and taking time to chat with our delegates - truly a top bloke.
Kent Housing - September 2014
"Simon was absolutely excellent please pass on our thanks again for making our event the success that it was. Simon took time to chat to people over reception drinks, and was very engaging throughout dinner. He then delivered a very entertaining account of his life timed to perfection for the half hour slot we had allocated, and brought very neatly in at the end to tie in with our National Careers Service message about having the right advice and the right time. We have had some lovely feedback across the region from those who attended."   Realise Futures Dinner for Raise the Bar Ltd - April 2014
"Tremendous feedback from our employees, subcontractors and clients. There were quite a few people who said that they could not believe that they actually had the privilege to meet Simon in person,  as they remembered Simon from when they watched the Falklands war conflict unfold and the injuries that he sustained as a result. It was a pleasure and an honour to meet Simon personally. I found him to be very down to earth and such an easy person to speak to. On behalf of the JSM Group Ltd we would like to thank him and we wish him and his family all the very best for the future."  Director, JSM Group Ltd - November 2013
"Please pass on our thanks to Simon for his presentation at the Healthcare Estates conference on Tuesday.  People were still talking about Simon's session the following day, and he was certainly a highlight of the event. He perfectly captured the theme of the event, which was putting positive energy into Healthcare" and set the tone very well for what was a very successful event."  Healthcare Estates Conference - October 2013

Falklands Veteran who suffered 46% burns to his body, Simon is an inspirational and motivational speaker whose message is one of overcoming adversity and how you can take on any challenges thrown at you. He also has a great sense of humour and can command an audience (he has real presence and has achieved legendary status in many ways), while managing to keep it light.