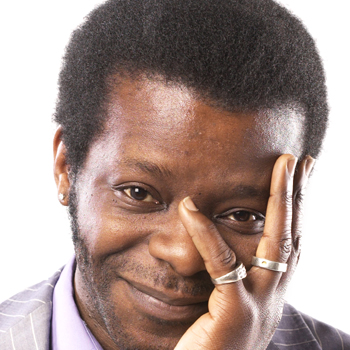 Supremely warm and wickedly funny and with an ability to charm, Stephen K Amos has entertained audiences all over the world with his natural, assured delivery and his honest, original material.  An almost child-like joy and exuberance surrounds him as he finds the funny in some most unexpected places.

A gifted actor, Stephen has impressed audiences and critics with his performances on stage and screen and has proved not only a gift for comedy but also for more serious roles. Comfortable as a performer, presenter, actor and guest he is likely to retain his position as one of the nation's favourite comedians for a long time to come.

In 2012 his autobiography "I used to tell people my mother was Shirley Bassey", was published.  It gives an hilarious account of growing up in South London in the 70s and 80s.
Aside from being one of the nation's favourite comedians, appearing on have I Got News for You, Mock the Week and Live at the Apollo, Stephen is a prolific writer and performer, releasing a new show every year and performing all over the world at festivals.
Some of the  TV and radio shows he has appeared in include:
Have I Got News for You (BBC 1)
Live at the Apollo (BBC 1)
BBC Sports Relief (BBC 1)
The Great British Bake Off (BBC 2)
Mock the Week (BBC 2)
Mastermind - Children in Need edition (BBC 2)
Snuff Box (BBC 3)
The Wright Stuff (Channel 5)
And Then You Die (Dave) Batty Man documentary (Channel 4) Penis Envy documentary (Virgin1)
The Odd Half Hour (Radio 4)
Life: An Idiot's Guide (Radio 4)
The Jon Richardson Show (BBC 6 Music)
What Does The K Stand For? (Radio 4)
"Stephen went down a storm, everyone really enjoyed and I think he too enjoyed himself as he spent the rest of the evening with us!  Lovely guy, really good to meet him."  Suzuki Conference
"Stephen went down a storm. He was very accommodating, which the client appreciated, and everyone really enjoyed it."  Stephen performed his comedy set for Absolute Corporate Events
"He hit the mark perfectly"¦I've never seen this audience so transfixed" Stephen provided the mid awards entertainment at the Private Equity Awards

Stephen K Amos is supremely warm and wickedly funny with an ability to charm onlookers right into the palm of his hand. A natural for corporate events he is always in demand. TV appearances include "Mock The Week", "Have I Got News For You" and "QI".