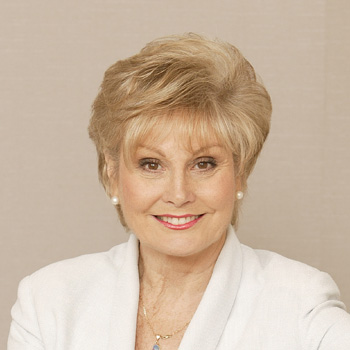 Angela Rippon Angela Rippon has been a familiar face and voice in British broadcasting for over 40 years. The career of this award winning journalist has embraced an impressive variety of programmes on both radio and television for both commercial and BBC stations in Britain, America and Australia.

The scope and quality of her work has been recognised by the Royal Television Society who entered her into their Hall of Fame in 1996. In 2002 she was voted European Woman of Achievement and in the Queen's Birthday Honours of 2004 she was awarded an OBE in recognition of her services to Broadcasting, Charity and the Arts.

Trained as a journalist in her home town of Plymouth, Angela worked for both BBC Plymouth and the ITV station Westward Television before joining BBC National News in 1973. She was appointed the first woman journalist newsreader in l975 and made two memorable appearances in the Morecambe and Wise Christmas Shows.

Angela was a founder member of the commercial breakfast service TV-am in 1982 and in 1984 moved to America to work for CBS in Boston.

She has presented a wide variety of programmes from hard news and current affairs, to quiz shows and magazine programmes for both BBC and Commercial radio and television. Titles include Come Dancing; Top Gear, the Antiques Roadshow, Masterteam, Crufts Championship and The Holiday Programme.

She has presented Cash in the Attic and Sun Sea and Bargain Spotting for BBC1 and remains committed to a number of charities, including the British Red Cross of which she is Vice President.

Angela has written many books, including the Victoria Plum series for children and 'Fabulous at Fifty and Beyond', as well as appearing in her own fitness DVD.

Angela also chairs conferences and seminars and is a highly skilled conference facilitator and after dinner speaker. She has a wealth of experience hosting events and award ceremonies, both at home and abroad.