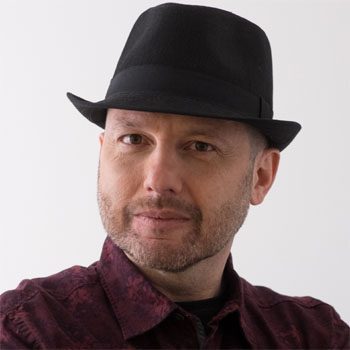 When Bennett had his identity stolen, the consequences were devastating. He spent two years trying to clear his name during which time he became penniless and homeless and had to live with family and friends.

Years later Bennett wrote a comedy show about his experience. He perfomed the show  'It Wasn't Me, It Was Bennett Arron' at the Edinburgh Festival for what was meant to be a short ten day run. However, due to the overwhelming response and excellent reviews;
'Kafka-esque... Hilarious' The Standard and 'Fascinating... funny... comedic invention and excellence ****' Chortle the run was extended.

As a result Bennett was asked by Channel 4 to direct and present a documentary on Fraud and Identity Theft.  In  'How To Steal An Identity' Bennett proved through a series of stunts, how easy the crime of ID theft is to carry out. He first stole the identities of members of the public and then went on to steal the identity of the Home Secretary. This action resulted in Bennett being arrested in a dawn raid by Scotland Yard under the code-name Operation Hydrogen.

The Documentary was Pick of The Week in The Guardian and The Telegraph and was called ‘Fascinating and Disturbing’ by the TV Times. Bennett went on to be shortlisted for a BAFTA.

Bennett now tours around the world, telling his disturbingly true yet funny account of what it's like to have your identity stolen and revealing the devastating consequences of making a documentary ‘in the public interest’.

He has spoken at events around the world including Infosec in London, The Palo Alto Conference in Holland, The International Fraud Convention in Italy, The International Congress On Anti-Fraud & Anti-Corruption in Poland and the CISO Security Forum in South Africa. He was also the opening keynote speaker at Auscert  in Australia in front of 1500 delegates.

Bennett has recently written a memoir about his experience of Identity Theft and how making a documentary ‘in the public interest’ can have devastating consequences.

Bennett has been called… 'A Welsh Seinfeld' by The Guardian, 'Genuinely Original and Funny' by The Times and ‘Case Number 2477419’ by The Metropolitan Police.

Bennett recently wrote and starred in the critically acclaimed BBC Radio Series BENNETT ARRON IS JEWELSH. His radio and television credits include presenting the documentary The Kosher Comedian for the BBC, appearing on Loose Ends, Not Tonight With John Sergeant, Glee Time (in which he hosted a series), Large (a satirical sketch show for the BBC), Never Write Off The Germans (a panel game show for Radio 2) three series of What's The Story (a panel game show for BBC Wales) and he was a presenter on Big Brother's Little Brother.

Bennett is also a trained actor and appeared in the film Dead Long Enough alongside Michael Sheen.

He has written for many comedy programmes, including Off Their Rockers, Hit The Road Jack and the BAFTA-winning V Graham Norton. He also wrote over 20 episodes and a feature film of Genie in The House, the highest-rated children's sitcom on Nickelodeon and episodes of the BAFTA-winning Slammer for the BBC. He was most recently one of the main writers on the children's sitcom Which is Witch?

"All our delegates loved Bennett and we had great comments on how funny he was and everyone was bowled over by his story."  Housing Technology Conference - March 2017

Bennett Arron is an award-winning writer, actor, author and stand-up comedian, but came to prominence when his identity was hacked. What followed was a two year battle to get his identity back, during which time he was almost bankrupted by the identity thieves. Has made a number of documentaries on the subject, and showed how easy it is to steal identities by taking the, then, Home Secretary’s (Theresa May, now the PM)