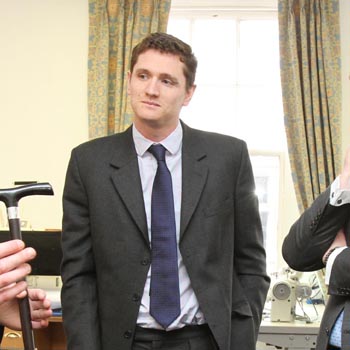 Captain Edmund Addington was days from the end of a tour in Afghanistan in 2009 when, whilst leading a platoon of young soldiers, a bomb exploded underneath his fighting vehicle leaving him severely wounded.

Twenty operations into his rehabilitation, Ed is now rebuilding his life. His battle to recovery is an incredible example of determination and drive to regain maximum fitness, having spent months at Selly Oak Hospital and Headley Court.

The level of bravery required to tackle such a life changing incident is one that when heard in person, inspires the audience to approach difficulties they may face with a similar degree dignity and fearlessness.

Ed was injured whilst commanding his platoon in a dangerous and complex situation; making decisions on a daily basis that meant life or death to others. Ed values leadership as the ability to inspire actions that people did not believe possible of themselves, always leading by example. Leadership on operations requires credibility earnt by example through a value-based approach " qualities that Ed eloquently demonstrates whist explaining how these skills are transferable to a civilian environment.

A passionate speaker, Ed provides a fascinating insight into the synergies between military and business leadership, and explains how values used to lead soldiers risking their lives on operations can educate leaders from any field.

Since his injury Ed has taken only positives from his situation, firmly believing that opportunity can come out of such adversity.  Amazingly, whilst teaching himself to walk again he has found the time to complete a Masters in International Relations.

As an inspiring motivational speaker, Ed's topics include: Overcoming adversity; Values based leadership; Creating the climate for success; Maximising Performance and Military values applied in a civilian environment.
"I feel very fortunate to have listened to Captain Edmund Addington, his speech was nothing short of inspiring. Confronted with a diverse business audience, who are often somewhat 'hard nosed', your story won over each and every person who listened. Truly unforgettable."  HSBC Private Bank
"Whilst we all regularly get visibility of UK Military Operations in Afghanistan through normal media channels, rarely (in fact I would wager never) do we get such a unique and intimate insight delivered from someone who has not only lived it, but had such a life changing experience and journey as a consequence of it. All thoroughly enjoyed the session and feedback from those I have spoken to has been outstanding."  Partner, Deloitte LLP
"Ed's story touched the hearts of everyone in the audience, but it was his courage in the face of extreme adversity and his fantastic ability to overcome obstacles that resonated deeply with our professional audience."   RLM Finsbury

"I have heard a significant number of servicemen speak about the benefits of Help for Heroes charity and I can honestly say that Edmund's speech was without doubt the best I have heard."  Bryn Parry, Founder -  Help for Heroes

Just days from the end of a tour in Afghanistan in 2009, a bomb exploded underneath his vehicle leaving him severely wounded. The story of his battle to recovery makes him an inspiring motivational speaker.