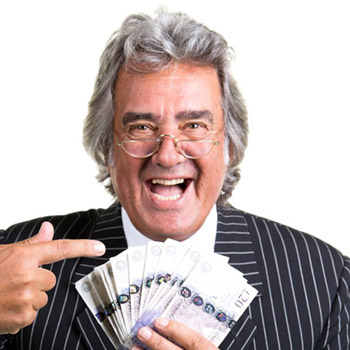 David Dickinson is the much loved and highly respected presenter of Bargain Hunt, the incredibly successful BBC1 daytime antiques hunt.

David has showered upon his millions of fans across the globe his limitless expertise to value ornaments and items of yesteryear, which is delivered with wit and friendly charm.

The career of one of the world's biggest personalities in the antiques trade began while he was travelling the world with his cabaret singer wife, Lorne Lesley. While Lorne entertained the public, David kept himself entertained by visiting the local antique and bric-a-brac shops where he would attempt to snap up a bargain.

In the mid-70s, David opened his first antiques shop with a partner. While his partner tended to the customers, David would travel far and wide in search of hidden gems that could be sold.

David then set up his own antiques business and had been successfully trading for over twenty years when his rise to fame began. Spotted on a documentary, David quickly established a name for himself as a popular presenter and knowledgeable expert on BBC2's the Antiques Hunt. David briefly wooed Channel 5 audiences before he was snapped up to present Bargain Hunt.

After his stint on Bargain Hunt his next TV series was Dealing with Dickinson a cross between The Apprentice and The Antiques Roadshow.