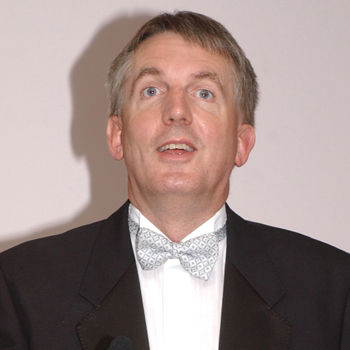 Dr. Kevin Jones is a hugely succesful practising consultant 'mirthologist', firmly established on the international after-dinner speaking circuit. Dr. Jones proves that a doctor can both cure and entertain thousands each and every year.

He is appearing at the Edinburgh Fringe in 2018

He qualified in medicine from Liverpool University in 1977 and during his career has worked on the Heart-Lung transplant team at Papworth Hospital, Cambridge and at St Bartholomew's Hospital, London. He is now a leading consultant chest physician.

In 1988, he spent one year at The University of Colorado in Denver, USA.  During that time he succesfully avoided developing even the faintest trace of an American accent, even finding time to research into lung transplantation. He is the author of The MD Thesis: Clinical and Experimental Studies into the effect of Prostacyclin On The Pulmonary Vasculature", a 'critical' objective for any reading list.

Dr. Kevin Jones has been entertaining audiences with tales of medical practise for over 20 years; his stories come from the world of medicine and transplantation, dealing with death, illness and dying and other less light-hearted topics!

His carefully delivered style of 'black humour' has never offended. Kevin also talks about his experiences in the world of Rugby League.

Dr Kevin Jones is an experienced after-dinner speaker, much in demand in the corporate world.  He has spoken at all types of events - all male, mixed and female. His regales his audiences with a completely non-serious look at medicine through the eyes of a hospital consultant. He has spoken at Lord Taverners dinners, Round Table National Conferences, Sporting Testimonials, business conferences, sportsman's dinners etc.

Dr Kevin Jones is married to Liz,  a general practitionar in Bolton, with two sons Robert (named after Bob Dylan) and William.

"The event went really well and everyone enjoyed both speakers.  Kevin Jones was hilarious as usual!"  October 2016