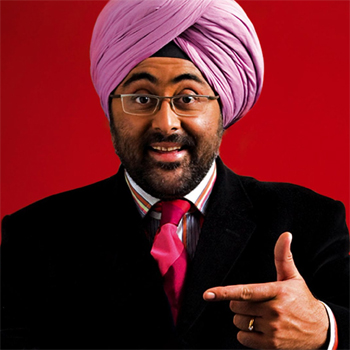 Hardeep Singh Kohli is a Comedian, broadcaster, journalist and chef, born in London Kohli and his family moved to Glasgow in Scotland when he was four. After graduating, he joined the BBC Scotland graduate production trainee scheme and moved to London, to direct Children's TV.
He worked on Janet Street Porter's series Reportage and the RTS and BAFTA winning "It Will Never Work". Most commonly known for writing, directing and starring in Channel 4's Meet the Magoons, The show was nominated for a Golden Rose at the [[Montreux Festival|Montreux Comedy Festival] And for writing, producing and presenting the BAFTA award winning documentary for Channel 4, "In Search of the Tartan Turban" in which he explored his cultural identity as a British-Scottish Asian, and which led to the follow up series 'Hardeep does¦' for Channel 4.
Intelligent as well as funny Hardeep Has appeared on the BBC political panel programme Question Time, and was an occasional presenter on Newsnight Review, Saturday Live on BBC Radio 4 and Loose Ends. In September 2006, Kohli took part in the first series of BBC One's Celebrity MasterChef programme, as runner-up this led to two series for UKTV Food, "New British Kitchen" and "Chefs and the City".
His love of food is expressed in the publication of his first book Indian Takeaway - One Man's Attempt to Cook his Way Home' (2008) He has written about food for Olive, Observer Food Monthly, The Spectator, The Times, The Sunday Times and various other publications.
And was appointed as a columnist for Waitrose Food Illustrated, he was also a member of the judging panel for the Organic Food Awards 2009. Versatile Hardeep has stepped out from behind his hotplate and taken to the stage with only a microphone and an evening's worth of humour as props. He performed a successful one man show, The Nearly Naked Chef (a reference to Jamie Oliver's The Naked Chef), at the Edinburgh Festival Fringe, with hugely successful comedy show tours that followed.
Read More