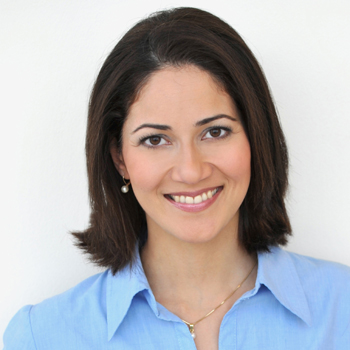 Mishal became the new presenter of the Radio 4 Today programme in the autumn of 2013.

She also presenters the main weekend news on BBC 1, has been a regular presenter on Newsnight and anchored various bulletins on BBC World as well as presenting the daily Insight programme. She has been a BBC World presenter since 2000, when she made her debut on the channel's business news and World Business Report.

Since then she has become a familiar face around the world fronting the main news bulletins, reporting on location, and interviewing for the arts programme HARDtalk Extra.

Mishal is particularly well known in the fiercely competitive television market in the United States, helping establish BBC World as an authoritative source of television news there.

In 2002 she became BBC News' first Washington-based anchor, fronting nightly programmes that developed a keen following in the crucial period before and during the Iraq War of 2003.

Throughout this time her wide-ranging interviews included Paul Wolfowitz, then still at the Pentagon; Richard Armitage, then at the State Department; and the well-known hardliner Richard Perle.

On location Mishal has been seen reporting live from Times Square, New York, as the financial markets reopened after 9/11; covering the first anniversary of the terrorist attacks from the Pentagon; reporting from Istanbul after the terrorist attacks in 2003; covering the 2004 US presidential election campaign; and fronting BBC World's India Week programming in October 2005. She covered the Pakistan Independence commemoration in 2007 and reported from Beijing for the Olympics in 2008.

More recently she has also been appearing on the BBC's UK programming, including as a presenter of BBC One's Breakfast and she is now a regular presenter of the weekend news. She is also a familiar voice on BBC Radio 4 in the UK, presenting Saturday PM, the World Tonight and contributing to current affairs series Profile.

Mishal has hosted BBC World's interactive series Visionaries, where classical masters of the past like Leonardo da Vinci were compared to modern day figures such as Sir Norman Foster.

Mishal's family is originally from Pakistan, but she was born in the UK in 1973 and grew up in the Middle East. She was educated at Cambridge University, where she read law, and went on to complete a Masters in Law at the European University Institute in Florence.

In 2009 Mishal hosted our Conference Showcase.  She is a popular chair for conferences and corporate events.

"Mishal was superb. Very professional and far more involved than I would normally expect someone in that role to be really helped the night move along smoothly. " Senior Project Manager, Seatrade Communications Limited  Seatrade Middle East & Indian Subcontinent Awards - October 2014

"Mishal was very professional on the day and linked key note speakers well, she also referenced key business changes in her address pulling together the key aspects from each speaker. Mishal's presence added to the impact of the Convention and I will certainly look to use again in the future."  Mishal hosted a management conference for Santander - November 2007

"Mishal was an excellent chair, both professional and vibrant - she kept the flow going really well and injected a little humour...I would absolutely use [her] again"  Mishal chaired a "Question Time" style panel discussion for Ernst & Young - September 2007

"Mishal went down very well. She is such a lovely lady to work with."  Brilliant Events on Mishal Husain who chaired a conference for RBS - September 2006

Radio 4 Today programme presenter, formerly on BBC World. A long term friend of the company, who published her first book “The Rules” last year. It intends to "inspire, motivate, champion and encourage all women to reach their potential, at work or in life" by focusing on "the practical skills that make a difference.