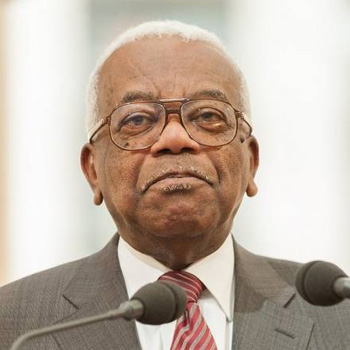 Born and educated in Trinidad, Sir Trevor began his career as a radio reporter, news presenter and sports journalist. He came to London in 1969 to work as a producer in the BBC Overseas Regional Service and went on to produce current affairs programmes for the BBC World Service. He joined ITN in 1973 as a general reporter and was given his first major assignment covering the Northern Ireland troubles.

Sir Trevor went on to cover sport and politics, travelling to Argentina, Australia and the West Indies before becoming Diplomatic Correspondent and presenter of Channel Four News in 1982. He has covered history-making stories including a number of US presidential elections. His coverage of the 'people power' Philippine elections in 1985 won a Bafta Award for Channel Four News.

At the start of the first Gulf War he did the first and only British television interview with former Iraq president Saddam Hussein. In the ensuing years at ITN, Sir Trevor conducted some of the most important TV interviews of the time - with Libyan president Colonel Gaddafi, former PLO leader Yasser Arafat and Bill Clinton. Sir Trevor became the first solo presenter of the then News At Ten in 1992 and anchored the Late Evening News until December 2005.

By then he had received more awards than any other news broadcaster in Britain and scooped the Richard Dimbleby Award for Outstanding Contribution to television from Bafta. He has also won a string of other top awards, too and more recently in 2003 he received the National Television Award for outstanding commitment to television, presented to him live on TV by the then prime minister Tony Blair.

Since leaving News at Ten, he presented Tonight, ITV's bi-weekly current affairs programme and has presented a number of documentaries for the channel across a wide range of subjects.