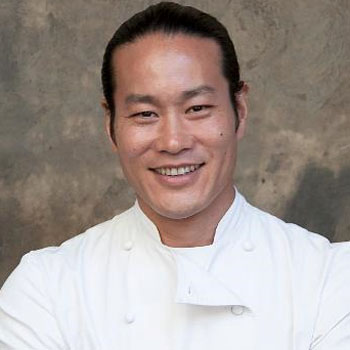 Yun Tanaka is an American-born Japanese-British UK TV chef, best known for presenting Channel 4's "Cooking It" as well as appearing on Saturday Kitchen many times on BBC One. He is head chef and owner of The Ninth restaurant in Fitzrovia which opened in 2015 and now has a Michelin star.

Jun has over 20 years’ experience working London’s top restaurants such as Le Gavroche, The Restaurant Marco Pierre White and The Square, where he was trained in classic French cuisine by Marco Pierre White, Phillip Howard and The Roux brothers. The US-born, UK-raised chef Jun Tanaka has become a household name in the restaurant industry, as well as a recognised face on television.

In 2004, Jun became the Executive Chef at the Pearl Restaurant & Bar – the showpiece of the Renaissance Chancery Court Hotel in Holborn – where he developed and refined a unique, modern take on traditional French cooking: a precise and sensitive approach that focused on showcasing and accentuating the very best seasonal ingredients. During his tenancy at the Pearl, he was awarded three AA rosettes.

Jun’s career in television dates back to 2006, when he presented his own series – Cooking It on Channel 4. He has since been a regular on BBC1’s Saturday Kitchen, UKTV’s Market Kitchen and BBC2’s Something for the Weekend. He has also appeared on various other shows such as MasterChef, and Michel Roux Jr’s Food & Drink.

Jun’s first cookbook Simple to Sensational was published in 2008.