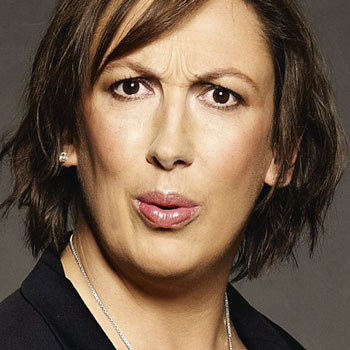 Miranda Hart has forged a niche as a comedy character actress as well as being a writer and stand up comedienne. Her size - she's 6ft 1in - and demeanour marking her out, like a modern-day Penelope Keith, for a certain sort of haughty role. She was described in the FT as "the most original and farcically hilarious female clown since Dawn French and Jennifer Saunders".
Born in Torquay, Miranda studied politics at Bristol before doing a post-graduate acting course in London. She first went to the Edinburgh Fringe in what she admits was 'a terrible show' called Hurrell and Hart. She has returned with more successful character shows several times since.
She starred as Teal in two series of BBC2's comedy sci-fi series Hyperdrive, earning her a nomination for best female newcomer in British Comedy Award in 2006, and appears regularly as a clumsy cleaner in Lee Mack and Tim Vine's sitcom Not Going Out. Her first Radio 4 show, Miranda Hart's Open House, began in 2007.

But her CV also contains appeances in French & Saunders, Nighty Night, Absolutely Fabulous, The Vicar of Dibley, Smack the Pony and The Abbey alongside Russell Brand and Morwenna Banks. She also appeared in the third series of Comic Relief does Fame Academy, but only lasted two shows,

The second series of Miranda began on BBC2 in 2010. The series ended with a viewing high of 4.1m and was re-commissioned by the BBC for two more series in 2011 and for 2012.
In 2012 Miranda featured in the BBC One drama series 'Call the Midwife'playing the character of "Camilla 'Chummy' Fortescue-Cholmeley-Browne.
Read More