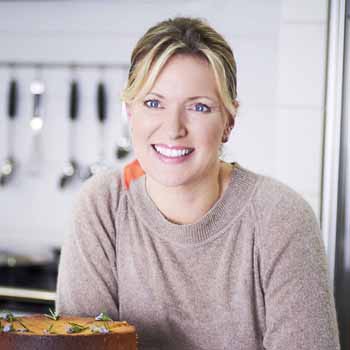 Rachel Allen was brought up in Dublin and left home at 18 to study at the world famous Ballymaloe Cookery School where she still teaches, as well as being a busy TV chef, author, journalist, and mother.
Rachel‘s style of cooking is practical above all - simple but delicious food, ideal for family and friends. Her influences are both regional and global. The BBC described her as an "Irish cooking queen" and Good Food Magazine believe she "has put Irish cooking on the map in recent years".
She has a devoted fan base in the UK and Ireland. Her charming manner and effortless style make her a delight to watch and her popular television programmes have been broadcast in 27 different countries on 33 channels. Her 10th series, Rachel‘s Everyday Kitchen was shown on RTE and UKTV‘s Good Food Channel in 2013, and her series Coastal Cookery in 2015.
In 2010 Rachel was a main presenter of Good Food Channel‘s flagship programme Market Kitchen. Her first show in the U.S.A. was Rachel‘s Favourite Food for Friends in 2010 on PBS. Her more recent programmes have aired on The Cooking Channel, and Easy Meals were shown on TLC India in 2014.
Rachel‘s international reputation ensures a busy schedule, with event appearances including Taste of Dublin, The Halal Food Festival, Emirates Literary Festival Dubai, Gourmet Abu Dhabi, World Gourmet Summit in Singapore, and work with brands such as Carte D‘or in Turkey. Her brand work in the UK and Ireland includes Panasonic, VeryCook, O‘Brien‘s Sandwiches, Waitrose, RHS, and Avon.
Her hugely successful licensing deals have included tableware, candles and textiles, small electrical appliances, oven and bakeware.
In 2013 Rachel launched her own range of cakes and dessert flavoured confectionery.
Rachel is the author of over 10 bestselling cookery books, with her latest 'Coast: Recipes from Ireland‘s Wild Atlantic Way' published in 2015.
She has written for Irish lifestyle magazine Image, The Irish Mail On Sunday Magazine, Olive, Delicious and BBC Good Food Magazine.
Rachel lives in her seaside home on the farm at Ballymaloe in County Cork with her husband and children.

Irish celebrity chef and writer with an international reputation for her simple, no nonsense good food.