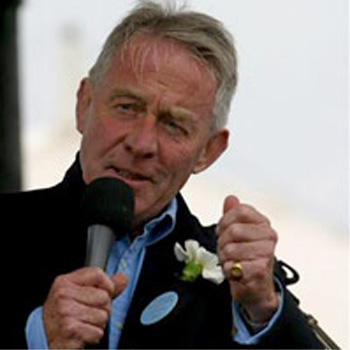 Since a child Roddy Llewellyn has been fascinated by plants and gardening. It all started when he was given a packet of seeds and a tulip bulb aged three. In 1976/77 he gained the National Certificate of Horticulture and the Surrey County Certificate in Landscape Construction at Merrist Wood Agricultural College in Surrey, and in 1977 he formed Roddy Llewellyn Landscapes. From 1978-80 commissions were mostly undertaken in the UK and the West Indies.

From 1981-85 Roddy was gardening correspondent for 'The Star', and from 1987-1999 for the 'Mail on Sunday'. In 1982 and 83 he was gardening writer for 'Oracle'. During 1996 he wrote a monthly series for 'Country Homes & Interiors'. In 1984 he gave a gardening lecture tour Sydney, Australia, and in 1987 designed an indoor gardening exhibition both at Selfridges in London and at Hertie in Munich.

His experience in horticulture has been wide and varied. In 1994 he was a panellist on 'BBC Gardener's Question Time', and in 1995 was elected an Associate Member of the Institute of Horticulture. A monthly series for 'Country Homes & Interiors' followed in 1996 when he was also a regular on 'This Morning' with Richard and Judy. In the same year he lectured in Richmond, Virginia, USA. He lectures on a variety of horticulture-related subjects, and designs gardens from small urban to country estates.

From 1997 until 1999 Roddy presented 'Roddy Llewellyn's Garden Guide' with BSkyB.  In 1997 he lectured in the USA then in 1998 he became gardening presenter for 'This Morning' with Richard and Judy and in 2000 he started writing for 'Period Living and Traditional Homes'. In 2001 he presented a series for HTV on famous Welsh Gardens and began writing for the website '50plus' and 'Country Illustrated' magazine.

In 2001/2002 he chaired a series of lectures for Sotheby's Institute of Art in London, filmed series 2 on 'Famous Welsh Gardens' for HTV, and has since written for 'Saga' magazine on the practicalities of gardening.

In 2003 Roddy co-presented programmes for the series 'Turf Wars', also 'Best of Britain'. During the winter of 2003 and 2004 Roddy launched the 'Llewellyn Lectures' near his home in Oxfordshire at the Burford Garden Company. Speakers for term one included Carol Klein, Alan Titchmarsh and Bunny Guinness.

A second term of the 'Llewellyn Lectures' in 2004  included Joanna Trollope, Roy Lancaster and the TV chef Brian Turner. In 2005/6  Roddy hosted a series of lectures at the Cotswold Wildlife Park near Burford. Talkers include Chris Beardshaw, Robin Lane-Fox and Lady Skelmersdale.