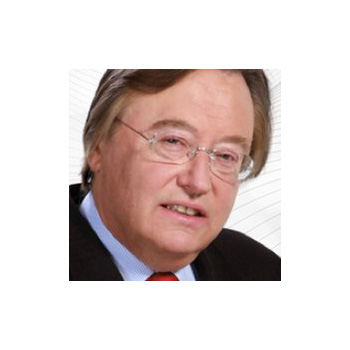 David Mellor was born in Wareham Dorset in 1949 and educated at Swanage Grammar School, Christ's College Cambridge and the Inns of Court School of Law.
He was called to the Bar in 1972, and practiced as a Barrister until he joined the Government.  He became a QC in 1987.
He was Member of Parliament for Putney from 1979 until 1997, and spent 11 years as a Minister in six Government departments, including two Cabinet posts as Chief Secretary to the Treasury, and founding Secretary of State for National Heritage (now the Department for Culture, Media and Sport).  He also spent five years as a Home Office Minister responsible for criminal justice policy and broadcasting, and was the Foreign Office Minister responsible for the Middle East, and Eastern Europe and the Soviet Union before the fall of the Iron Curtain.
Since leaving politics, David Mellor has pursued a multi-faceted career as an international businessman, broadcaster and journalist.
In business he has been a senior advisor to a number of major international companies, including Ernst & Young, BAe Systems, and Aedas, the world's biggest architects.
He is currently Senior Investment Advisor to a major Gulf based Islamic bank.  He is Chairman of his own property company, and Senior Partner of an investment brokerage with offices in London and Hong Kong, who introduce overseas capital into a variety of UK transactions.
As a journalist, he was once described by Sir David Frost as " having more columns than the Parthenon". He has had regular slots in 6 national newspapers over the years.
As a broadcaster, he has presented more than 1500 programmes on four of the BBC's 5 national radio stations, as well as Classic FM and LBC.
He presented the cult football phone-in 6.0.6.on 5Live for 8½ seasons, and has spent 15 years with Classic FM presenting a variety of programmes: Currently he has a show on Saturday evenings looking at the much maligned, but very enjoyable Light Music genre, while his 2 hour slot on Sunday evenings is a classical music journey of discovery.
While at LBC, his Saturday morning programme with Ken Livingstone was nominated for a Sony Award as best UK speech programme.
For the past 15 years he has also been the Opera and Classical Music critic of the Mail on Sunday.

Former MP and cabinet minister now a successful businessman, journalist and broadcaster. Popular speaker at corporate events with a lot of experience of doing business in the Middle East.